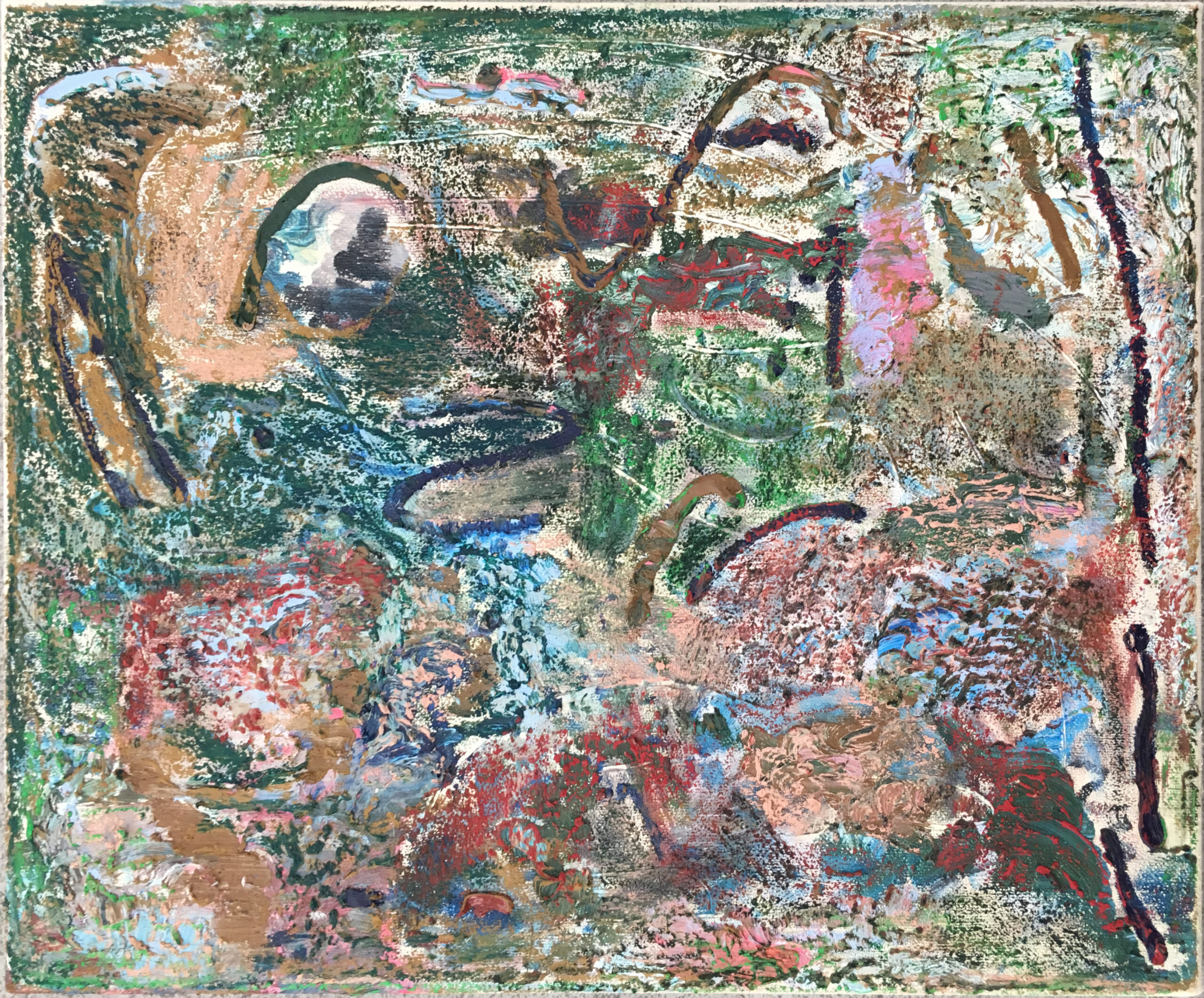 Adrian Buschmann’s art (*1976 in Katowice, Poland) can be classified as abstract. It focuses on the aesthetic and is characterized by his expert skill on the one hand, but also by the idea of creating an alternative world on the other. His images achieve this status by having the art and viewing material filtered through a process of thought and feeling.

Richard Hoeck (*1965 in Hall in Tyrol) self-reflexively deals with the representation of American art from a European perspective. Hoeck works with a variety of media including sculpture, screen-printing, video, installation and photography. Since 2006, he has repeatedly dealt with the issue of drug abuse and the consequences of the aggressive US pharma industry. His exhibited piece, Painting Death, shows details belonging to an older piece of packaging from the painkiller FENTANYL. It toys with the visual information of “narcotic drugs”. He does this strikingly and in an abstract way by using spray paints.

Andy Hope 1930 (*1963 in Munich) combines conceptual methods with a radically representative mode of working. He does this by using various media, including painting, drawing, reliefs, sculpture, graphics, propaganda, advertising media and film. His pieces are assemblages that shed light on facets of history, power and pop culture, whereby he often uses figures such as superheroes, monsters, phantoms and dinosaurs in his work. He aspires to compare the past and the future and to recreate this as a form of something forgotten and also to infuse it with some hope. This ambition is apparent in his pseudonym, which is an anglicized form of Andreas Hofer that is combined with a return of his own artistic personality to the year 1930.
John C. Welchman, Past Realization: Essays on Contemporary European Art XX–XXI, Bd. I, Sternberg Press, Berlin 2016, P. 23–24 (introduction)

Hans-Jörg Mayer’s (*1955 in Singen, Germany, lives and works in Berlin) early artistic work was already characterized by an emblematic approach, which was initially expressed in his typography. This linguistic constant has remained in Mayer’s work until the present day and embodies a form of the aesthetic process for him that changes over time; it thus also becomes a means to write in way that is appropriate to the relevant time. Mayer’s “Peitsche” (“whip”), which undergoes semantic reinterpretation in its title and thus becomes a questionable, linguistic motif for the viewer, is part of whole floral series. These series show the process up until the withering of the respective plant.

The diversity of Oswald Oberhuber‘s (*1931 in Meran, South Tyrol) work is generated by the understanding of permanent change and thus signifies a radical break with the idea of ​​a uniform, stylistically consistent oeuvre. His impressive drawings, paintings and sculptures range in their origins from Art Informel to the dissolution of form. Oberhuber’s idea of ​​abstraction and the spontaneous unconscious is radically reflected in its stylistic idiom in plaster, wire and other fragile materials.

Hans Weigand (*1954, lives and works in Vienna and Tyrol) has developed characteristic imagery in a wide field of activity. This imagery comments upon and interprets the cultural identity of modern society. Digitally processed painting, photography, computer graphics, film and video pieces, as well as large-scale installations are amongst the media he uses. Revived old techniques and motifs such as woodcut and painting join the recurrent waves. Weigand’s turned attention to woodcutting stems from his need for deceleration. He also uses it to help him describe his metaphorical thoughts on the present. The idea of ​​the altar was deliberately chosen here. This medial superimposition of stories from fragments of fantasy and trivial culture is superimposed on present-day media images, which are in turn superimposed on content of past prophecies, thereby demystifying the art-historical embodiment of the apocalypse.

Michael Riedel (*1972 in Rüsselsheim, Germany, lives and works in Frankfurt) has been developing his self-sustaining artistic production since the late 1990s. In it, new pieces are made into seemingly endless loops and combinations from existing material. While his work encompasses painting, text, audio, video, photography, publishing, architecture and performance, and initially seems to share a conceptual affinity with pop and appropriation art, it is really a departure from the problems of mechanical reproduction and simulacra that older generations had focused on. In the works shown here, Riedel uses freely available texts – found on websites belonging to a range of specialist artists’ stores – for his own art material. 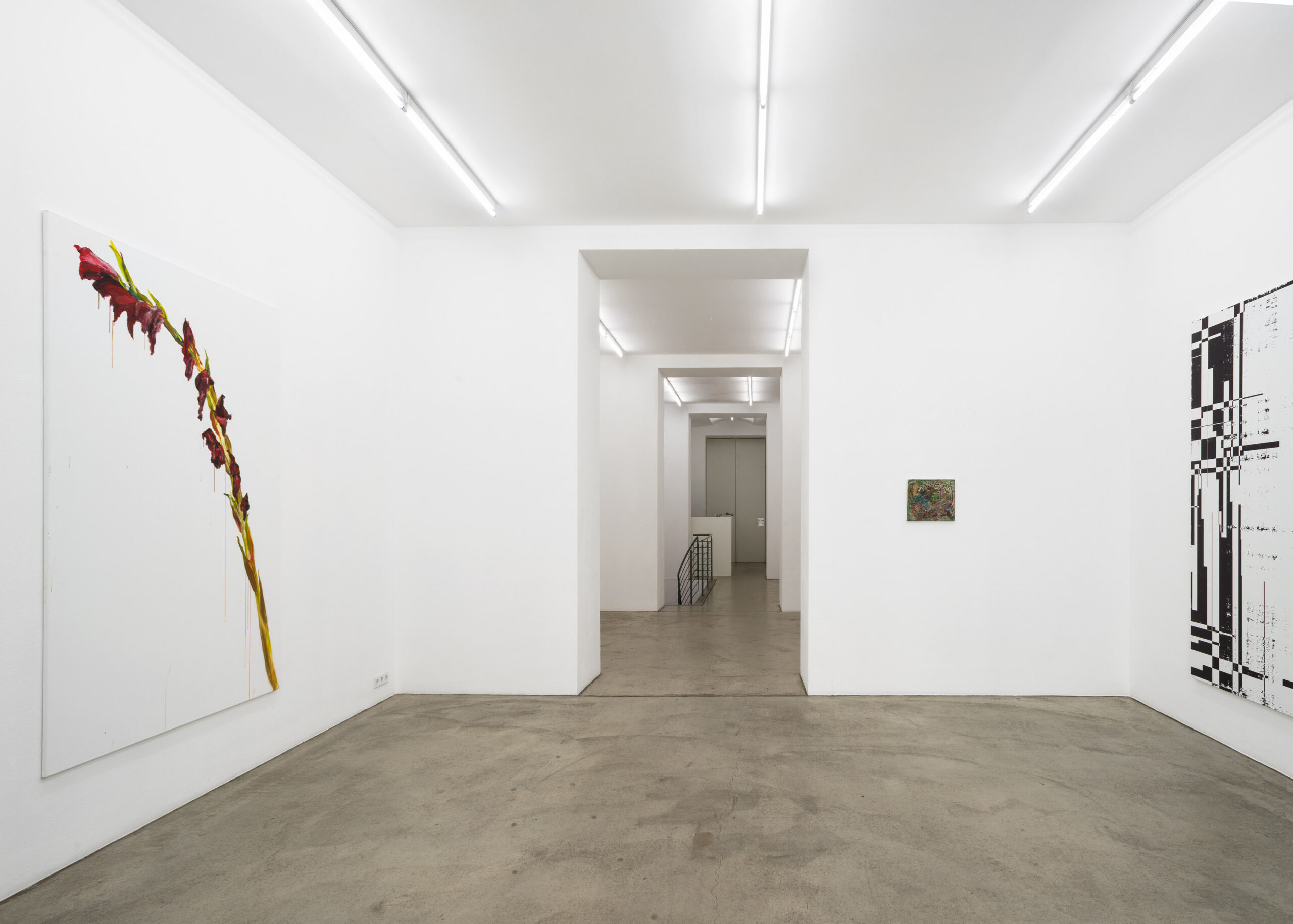 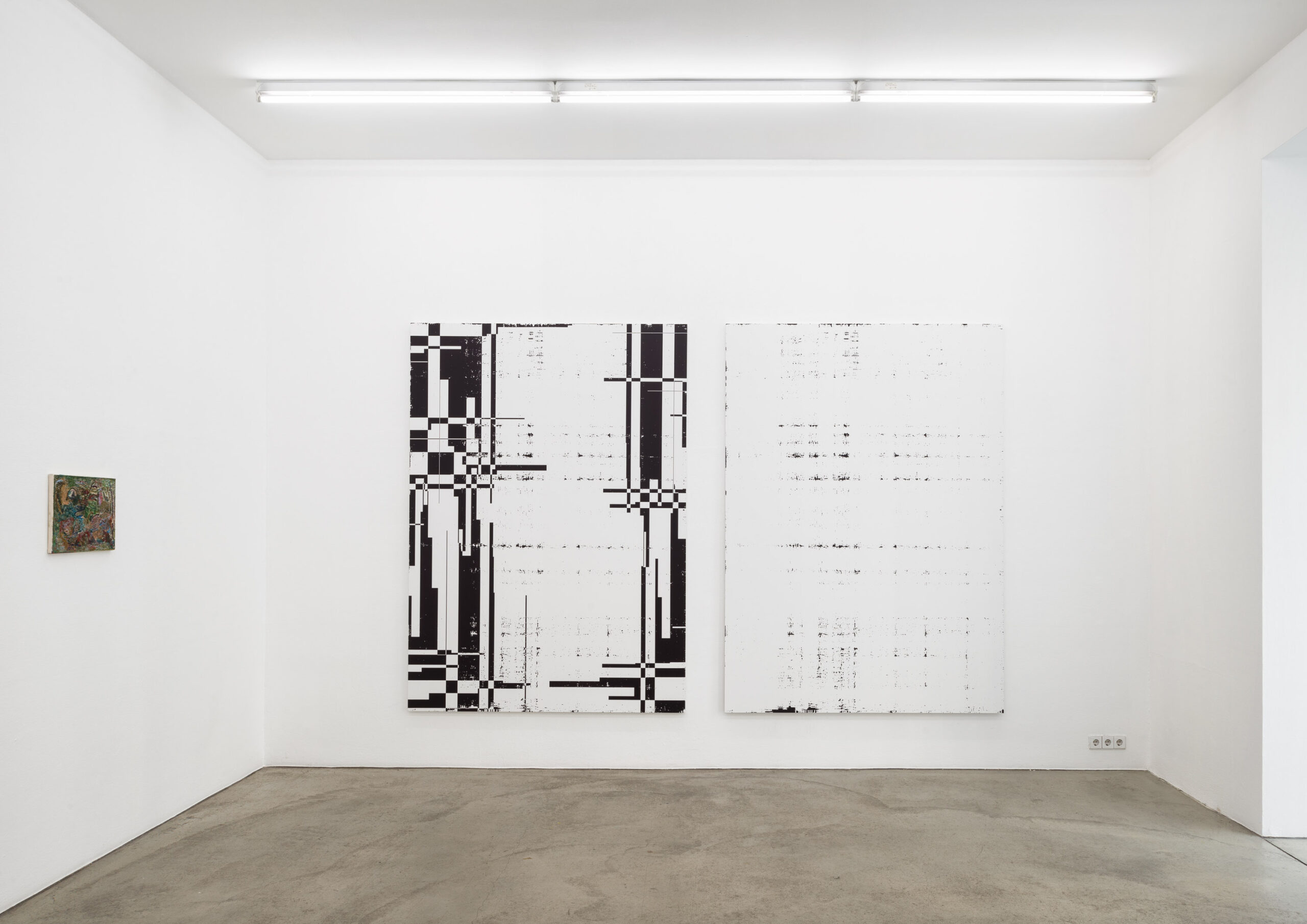 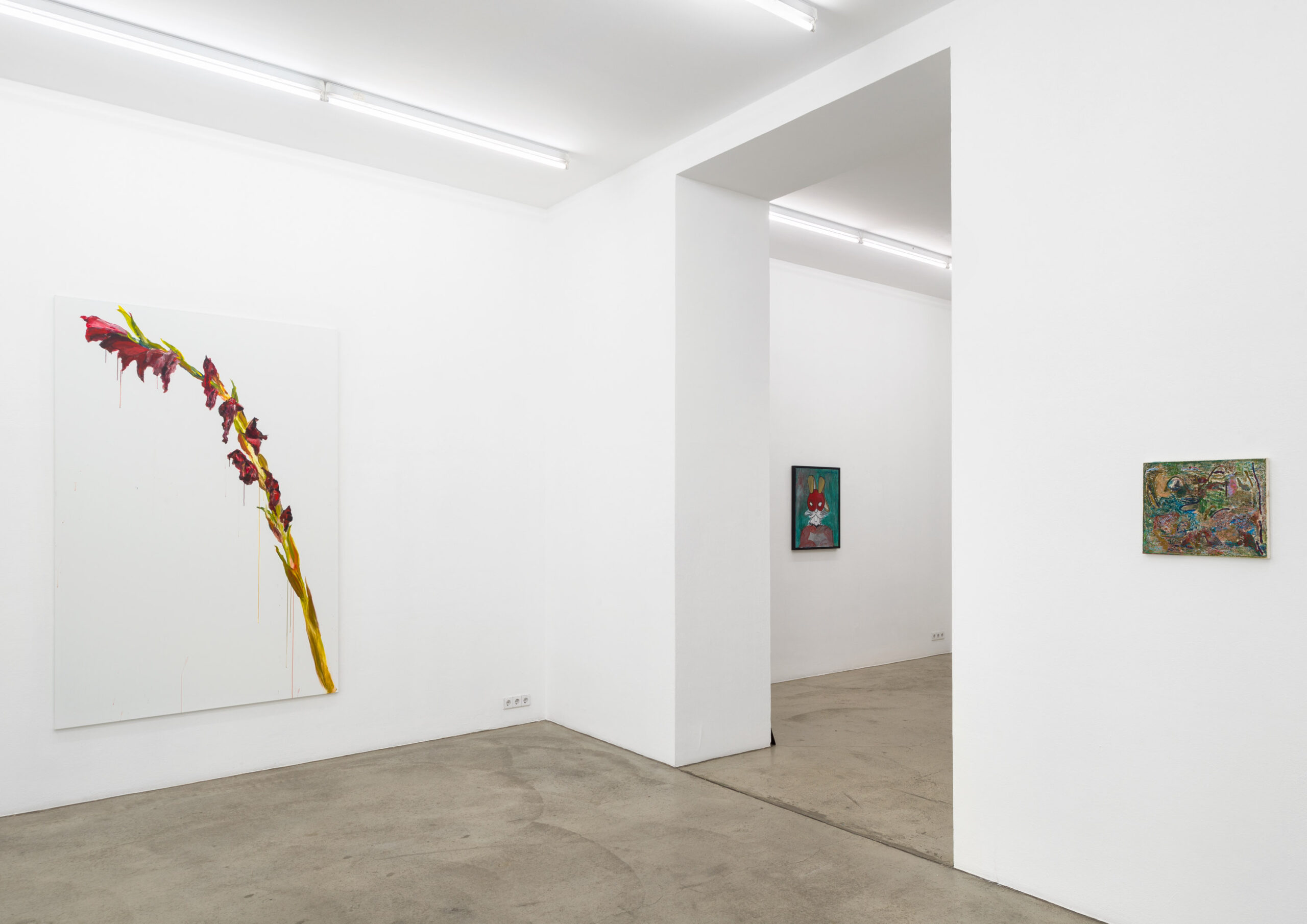 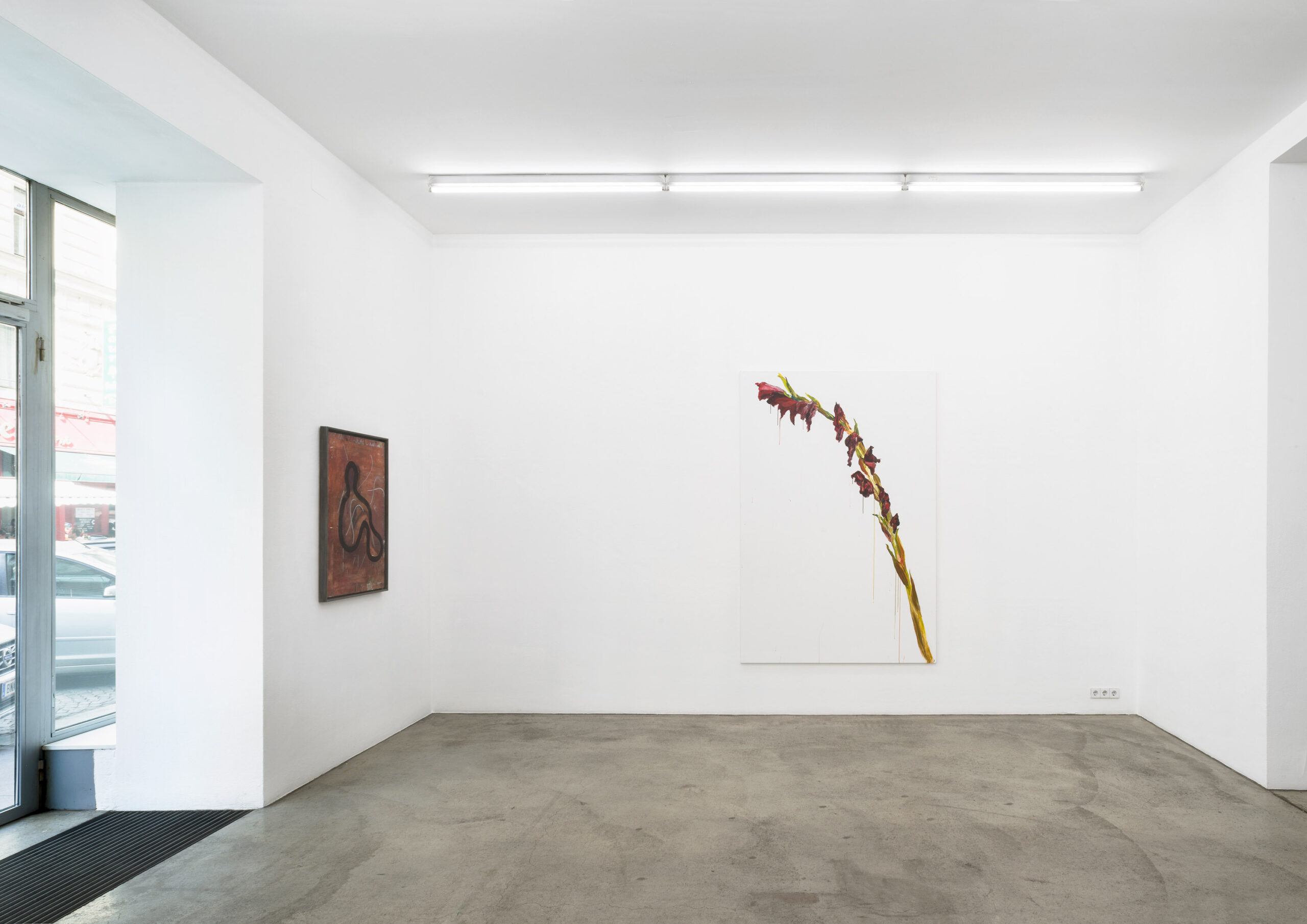 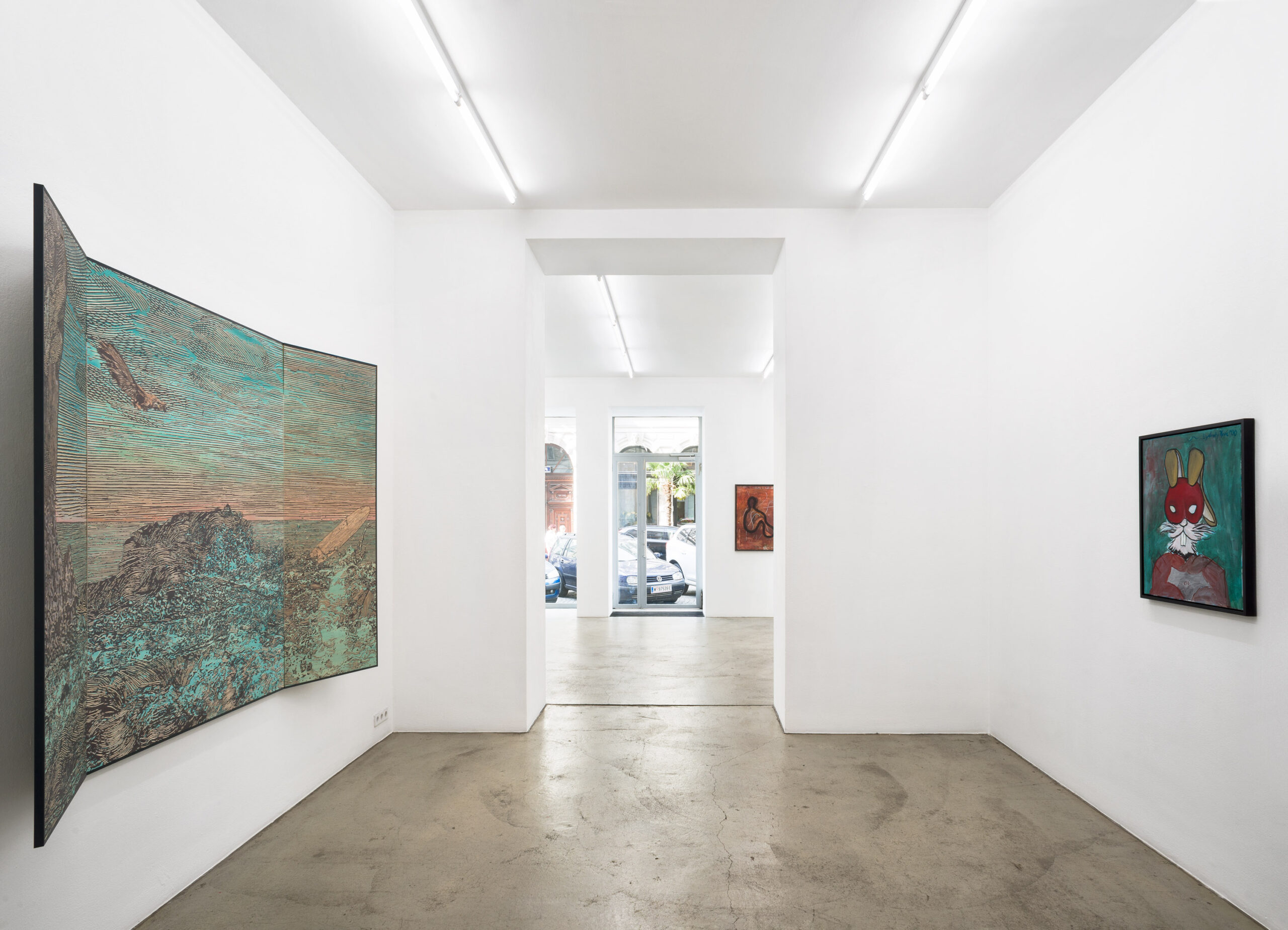 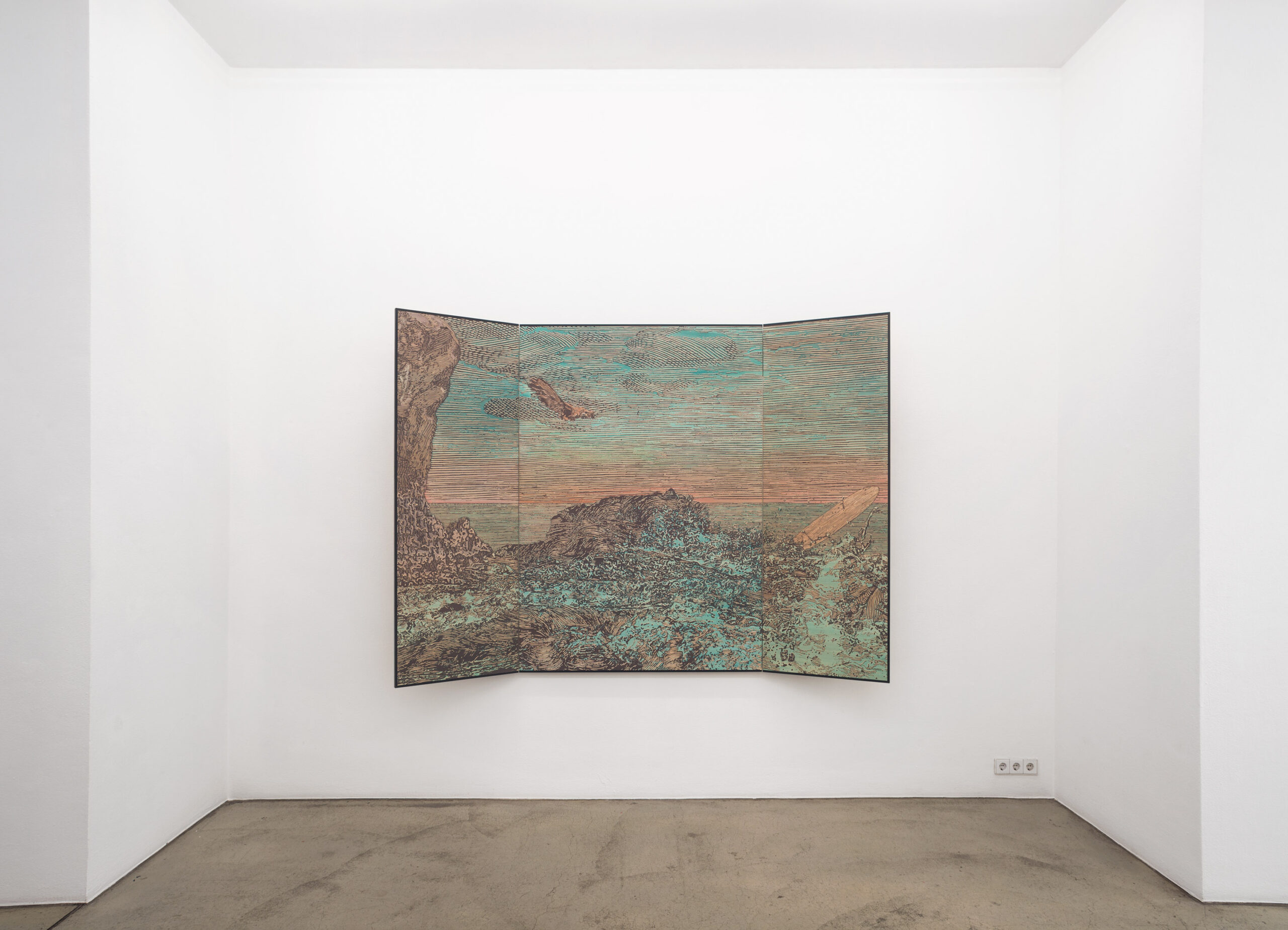 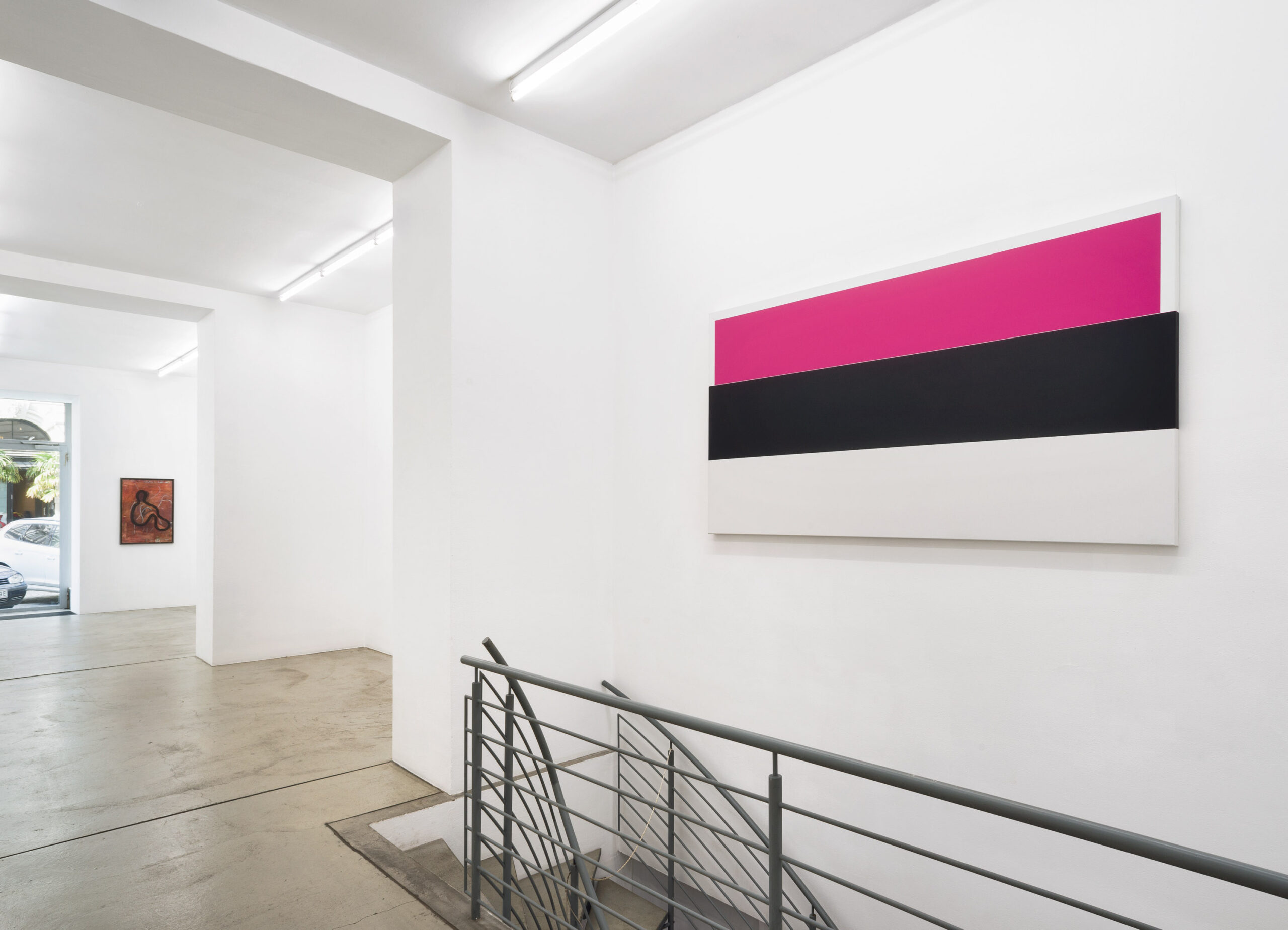