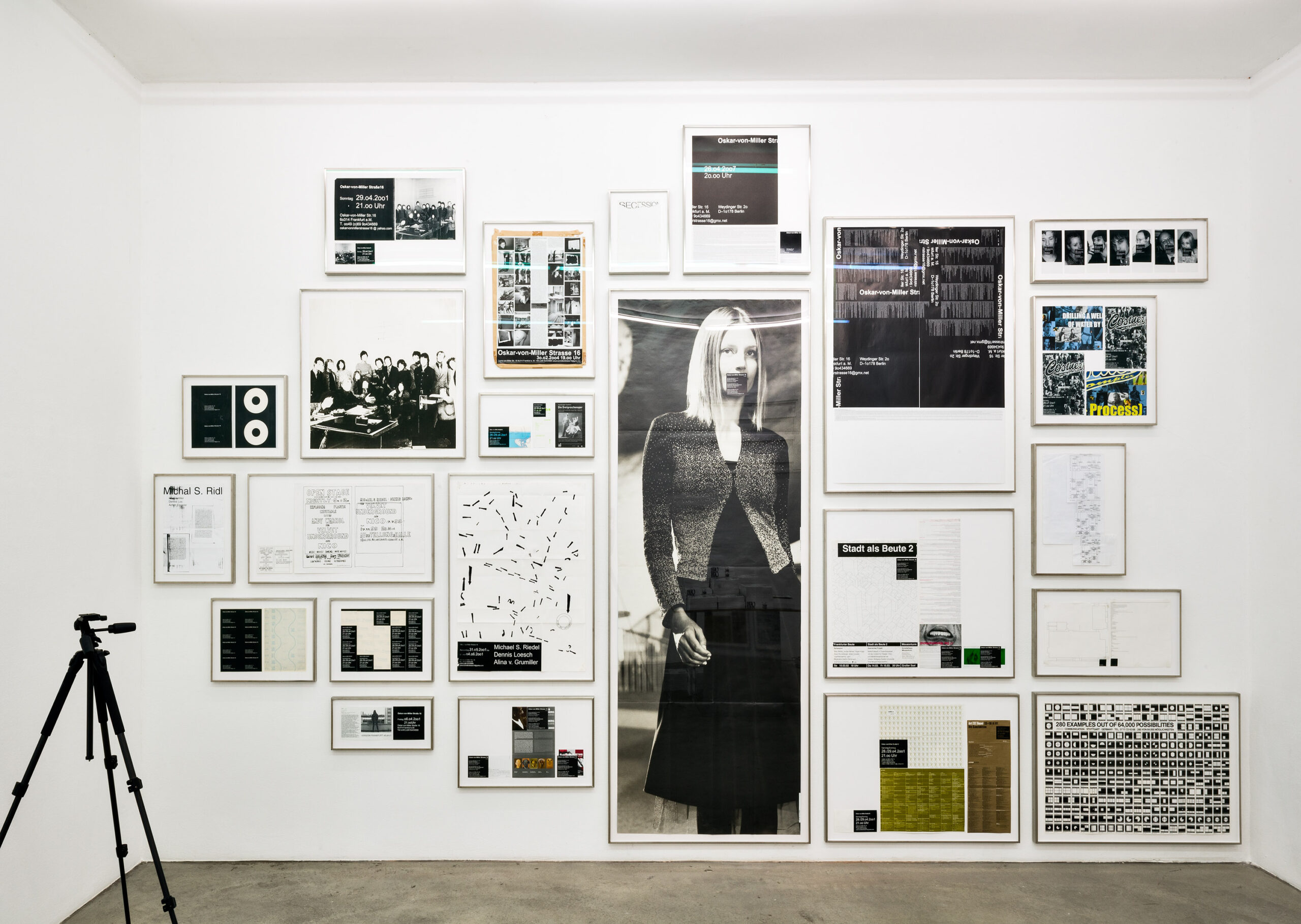 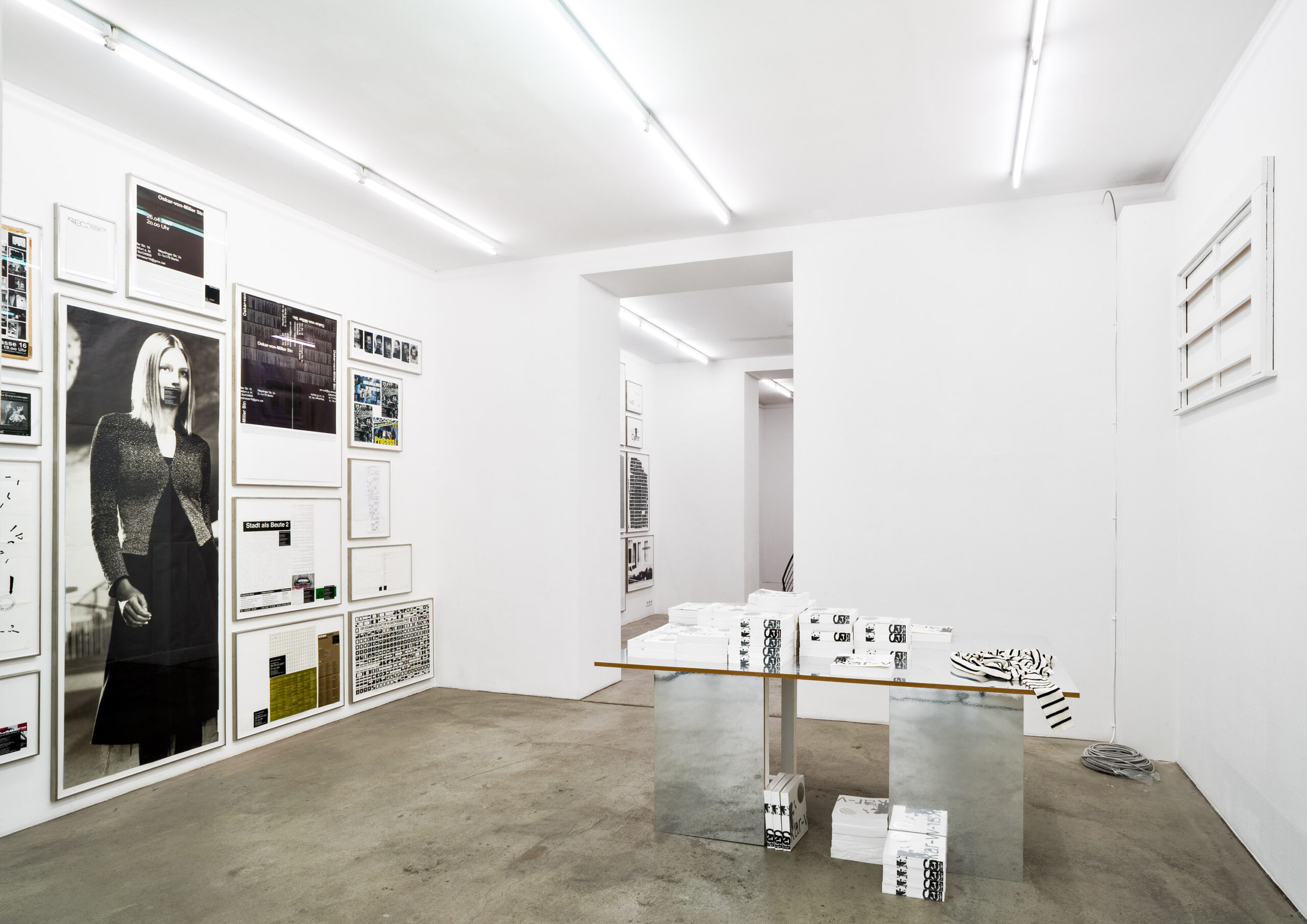 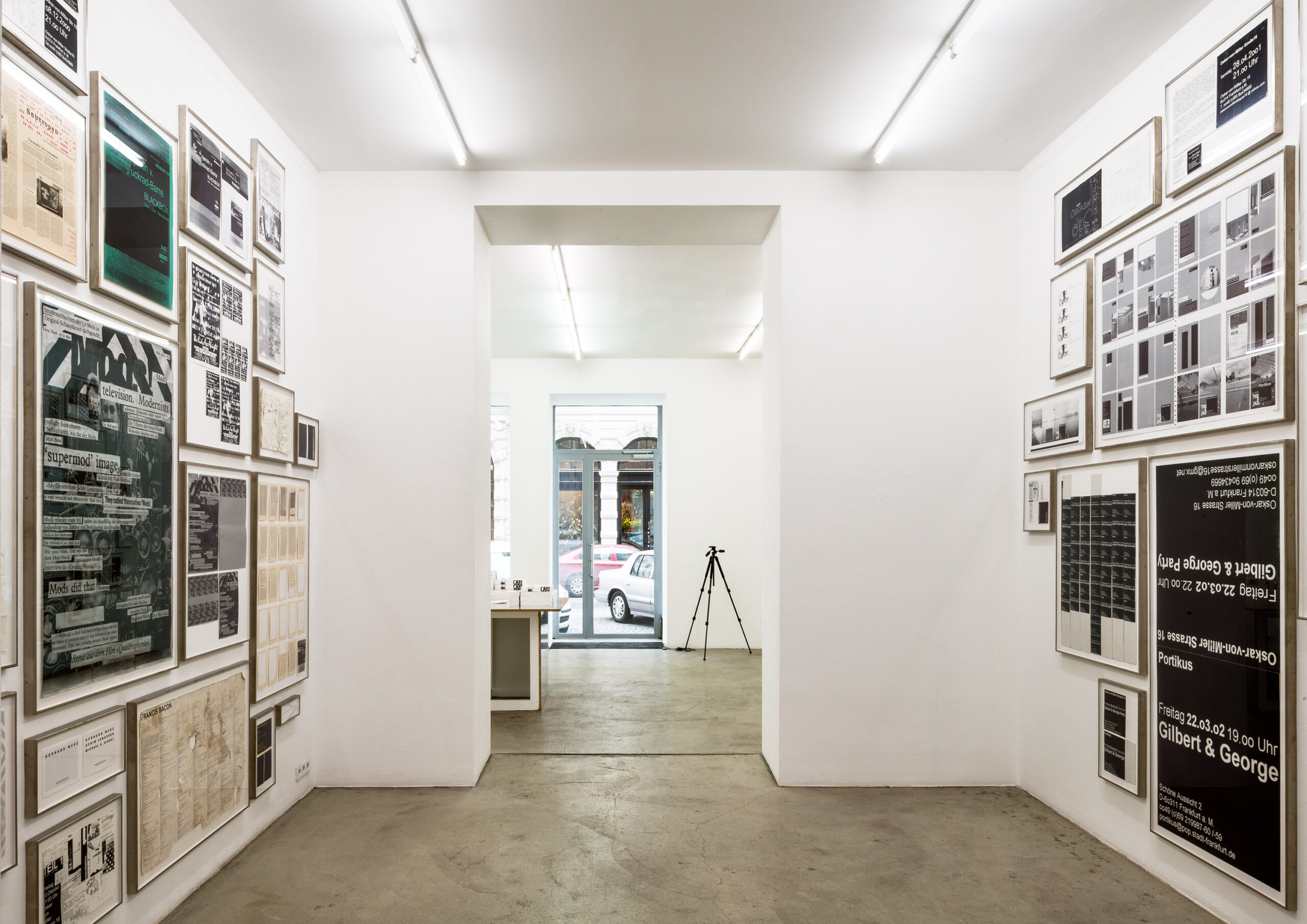 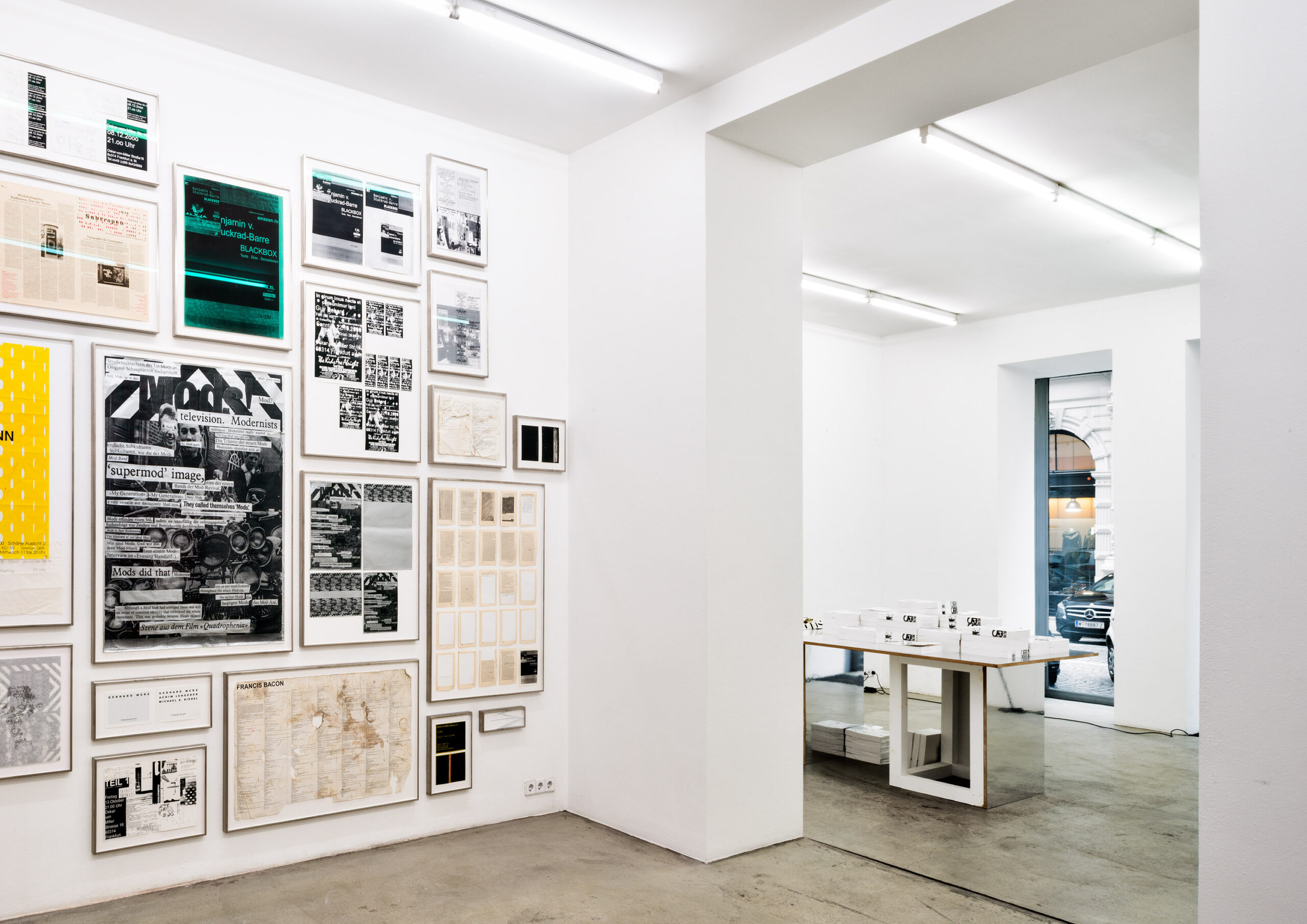 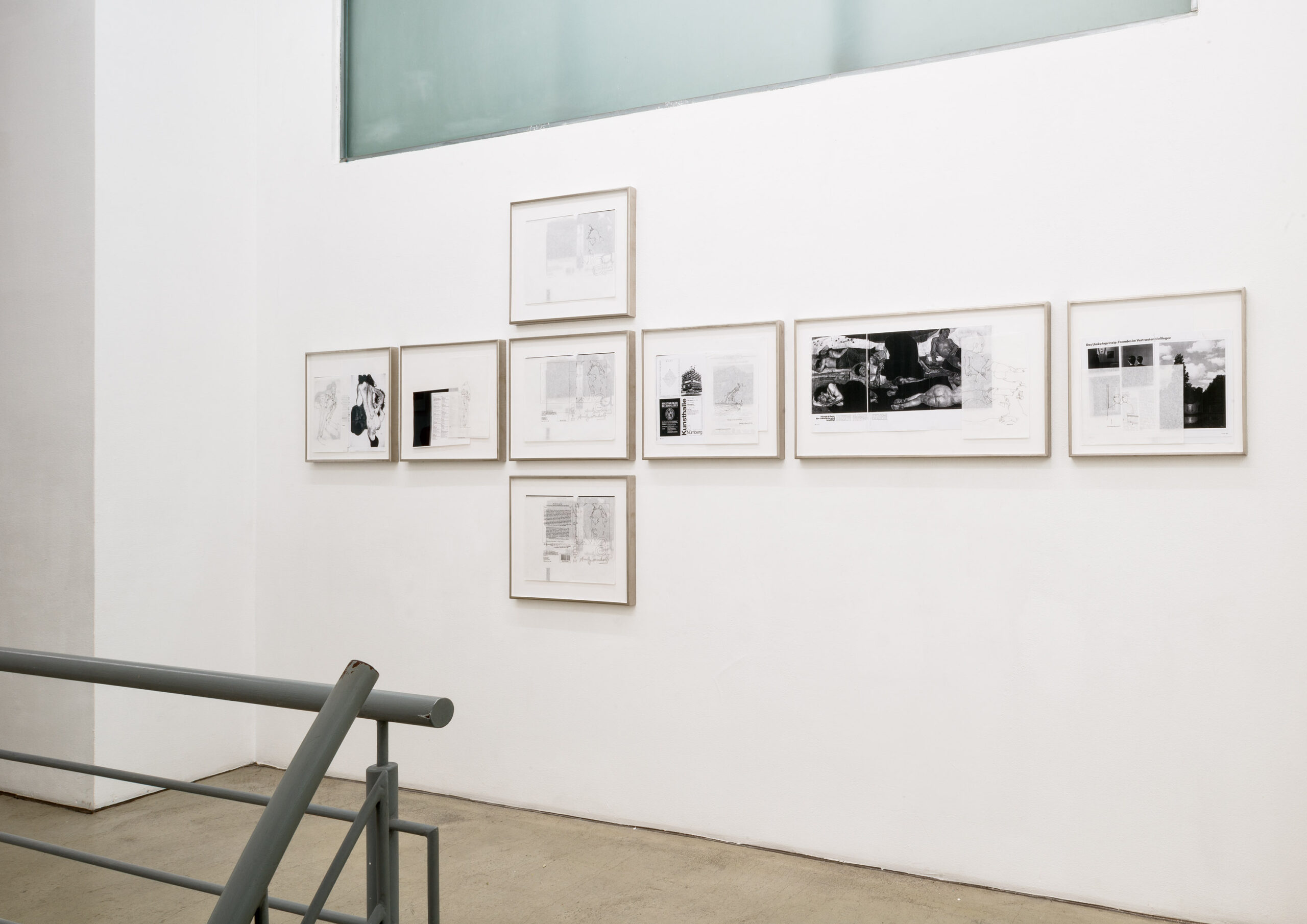 This is our seventh exhibition together since 2001. I assume you are just as happy as I am. The exhibition’s title: “record, label, play back” (misunderstanding, ignorance, double blur), works from the archive of “Oskar-von-Miller Strasse 16” (2000 – 2011).

In 2003, at the occasion of the exhibition “context-form-Troy” at Vienna Secession, where the replica of the art space “Oskar-von-Miller Strasse 16” was located, the accompanying publication “Oscar” was released documenting the years 2000 – 2003. At the beginning of this year, the revised edition of “Oskar” was published, also covering the years 2003 – 2011. This is why also the new edition of the exhibition makes sense for me, as it has become richer in material and in reflection.

The exhibition is touring and also stops in Vienna. Starting point was London, where in May the works were on display at David Zwirner’s under the title “Laws of Form”. Nothing worth mentioning has stuck in my mind from the artist talk with Gregor Miur at ICA. Time Out London suggested “I could have achieved the same effect exhibiting a giant penis with a crown”. Adam Romple, whose article in Daily Serving I warmly recommend, took more reflection time. At the beginning of 2015, the next stop will be Paris and I am already looking forward to talking with Jean-Pierre Criqui at Centre Pompidou.

In a few and advertising words, “Oskar” can be summarized as follows: “This is the story of Oskar-von-Miller Strasse 16 (2000 – 2011), an art space that shot to fame as a giant music player. The statement “record – label – play” refers to a group of young artists who were repeating the language of the public offer of culture, very often without understanding what was said, but always with an aesthetic interest in the error of the broadcast. The book itself is no exemption to that. With several image and sound recordings, the latter in form of transcripts of two anecdote conferences, the year-long Troy is documented. A natural phenomenon amidst innumerable cultural efforts!”

The installation “Warhol shooting” (2001), a replica of the rooms of Warhol’s second factory as pictured in Cecil Beaton’s “Andy Warhol and the members of the factory” (1969) serves as display for the book and was already used as a setting for a re-enacted group photo in 2001. The camera is also part of the installation; it is placed in almost the same position as Cecil Beaton’s perspective was back then and, via an automatic recording function, takes pictures of the reading exhibition visitors. Also Andy Warhol is among the readers, as on the cover he tries to decipher the title floating before him. The cover design is a reformulation of the new edition of his novel “a – a novel” (Groove Press) that was published in 1998.

With the letters O s k r around it, a simply became Oskar. Just as one can make a B-C-D-E…-version out of everything else which, contrary to what was created, shall be read as the non-created. That is the first step towards a theme which “Oskar-von-Miller Strasse 16” has been played in several variations over the years. The large amount of material shall not be frightening. If one knows the rules of the game, it is quite relaxing to observe the multitude of moves. In the foreword “Re-entry”, I described this process as a point zero of creativity which from another perspective may sound promising but also means art as a theme.

In addition to the book, several other paper works in relation to events of “Oskar-von-Miller Strasse 16” are on display, such as posters and flyers which have often been printed or glued onto already existing advertising material just to be circulated once more , announcing some kind of originality taking place elsewhere. The archive of “Oskar-von-Miller Strasse 16” also includes other image, sound and installation material which for lack of space cannot be shown, but which document the rapid development of recording capacities. From 1997 to 2007, for instance, recordings lasting for 85,645 minutes (60 days) were produced, 12,235 minutes (9 days) of which have so far been transcribed, which in return took 45 days and can comfortably be read within 4 to 5 days, depending on the reading mode. “Michael Riedel reads Oskar” (which in fact I have never done) is the name of the event taking place at MAK Vienna on 18 November. I will let the art space hang loose from the ceiling as a formless rag and will, together with Marcus Hurttig (curator, Museum of Fine Arts Leipzig) talk about how, based on the wrong event, the documentation of “Oskar-von-Miller Strasse 16” may in fact be read as art.