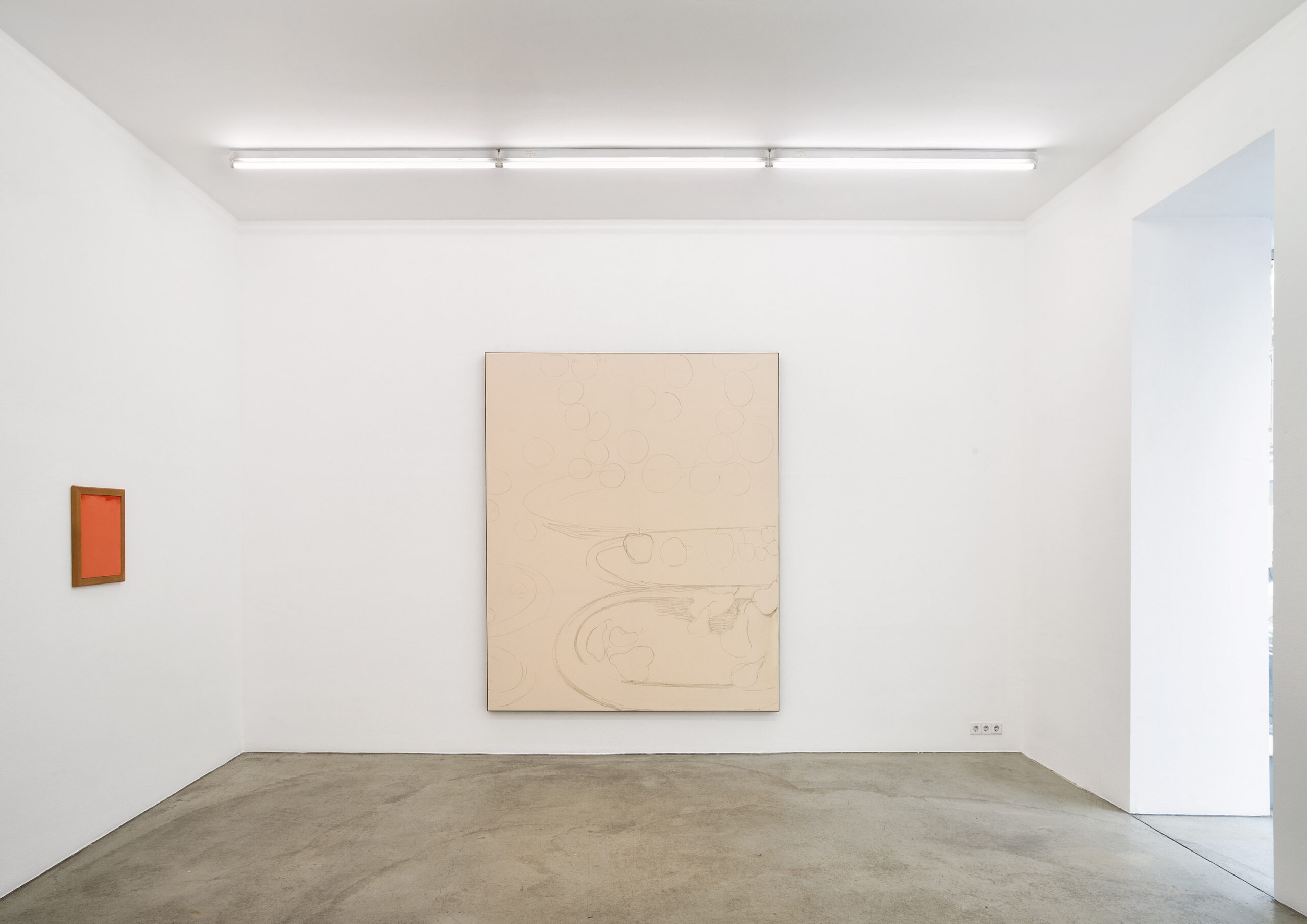 Adrian Buschmann makes statements such as: ‘Just as I paint the larger ones [sic paintings] for people who look like those in them, I paint the small ones for their big siblings.’, thus legitimising the dedication of paintings to other paintings.

With the same sovereignty he slips into the opus of passed away fellows in which he detects vicinage to his own works. Evoking Deleuze’s enculage , Buschmann produces in a manner of speaking their posthum bastards. Perhaps this resonates incidentally with the title of the exhibition, which sounds cheerful in Italian (macchiato), but whose meaning, translated to German or English (maculose), reveals a more sinister and awkward tone. To Buschmann, works of other artists resemble a holiday from himself. By dislocating particular lines from the large paintings onto the smaller ones as another method of distancing, and with aesthetic considerations alone as criteria, such decontextualisation shifts parts of his oeuvre to the genre of abstraction. All these facets of separation and estrangement beget a space with diminished barriers to the onlooker’s own interpretations.

This is further being supported by the disclaimed authorship inherent in the artist’s approach. Significant for this exhibition is Buschmann’s revisit of Leon Chwistek’s works, an endeavour the artist was already occupied with in 2015. Given his change of residence, from the Ligurian Sea back to the city, Buschmann sensed that there were contemplations that still called for completion, especially in the now “new” environment.

Chwistek’s drawings depict socialites at the early 20th century, a privileged circle on the quest for pleasure above all. The gestures in Chistwick’s illustrations imply refinement. Buschmann transports them via hyper-minimalist pictorial cover versions into the present. Contemporary insignia, such as fashion and devices, are missing completely, as essentials never have seemed to have changed anyway. The artist’s attention is therefore more geared towards affects and forms than this kind of formalities, which further assures the even transference of the pictures he occupies to the current. Lines bear such a weight in Buschmann’s body of work, that references can be frequently found in the titles of the paintings, sometimes as puns: i.e. the painting titled “SS2018”, in the world of fashion commonly used to abbreviate Spring/Summer, but used here to hint at the silhouette of the figures depicted in the painting. 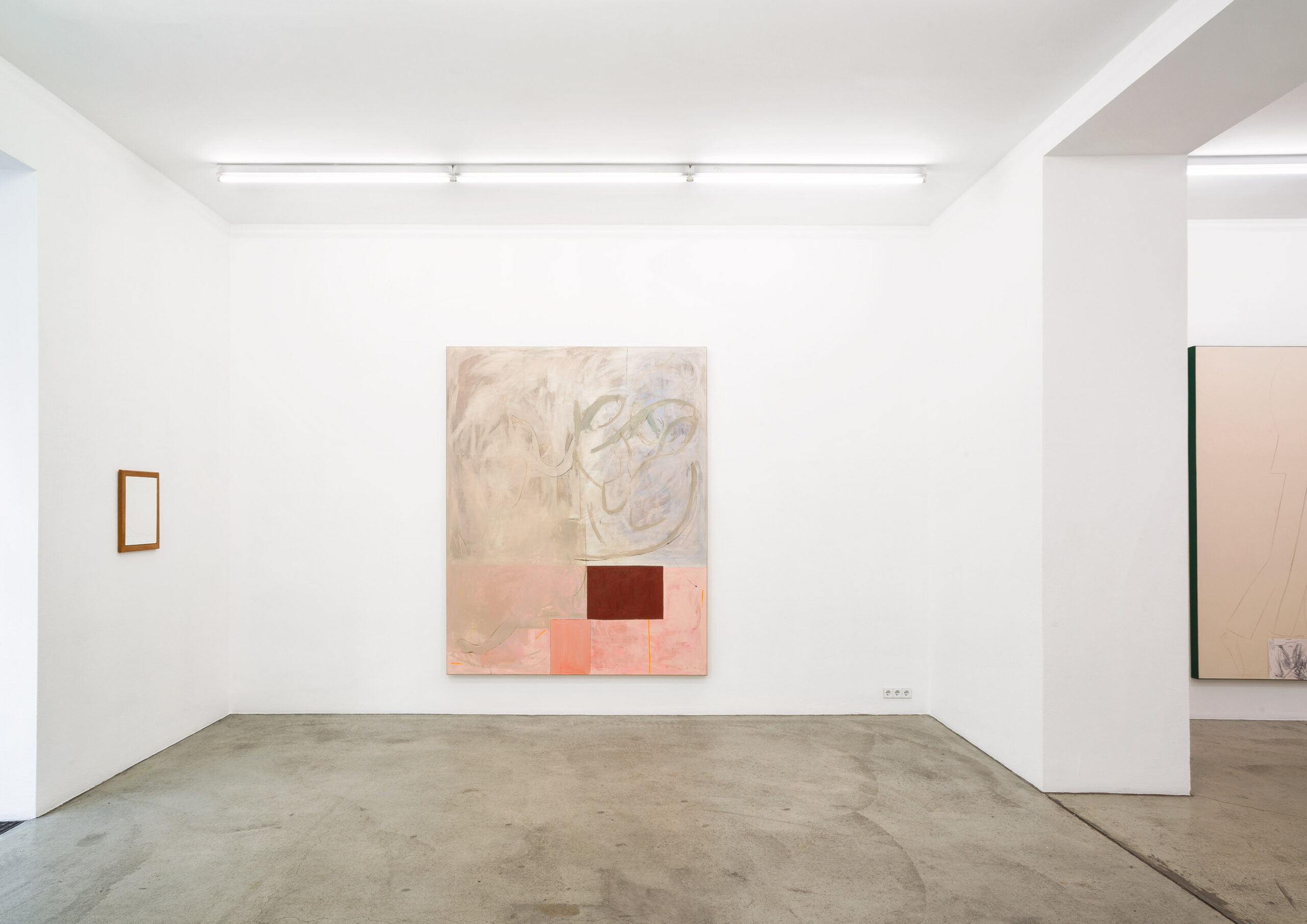 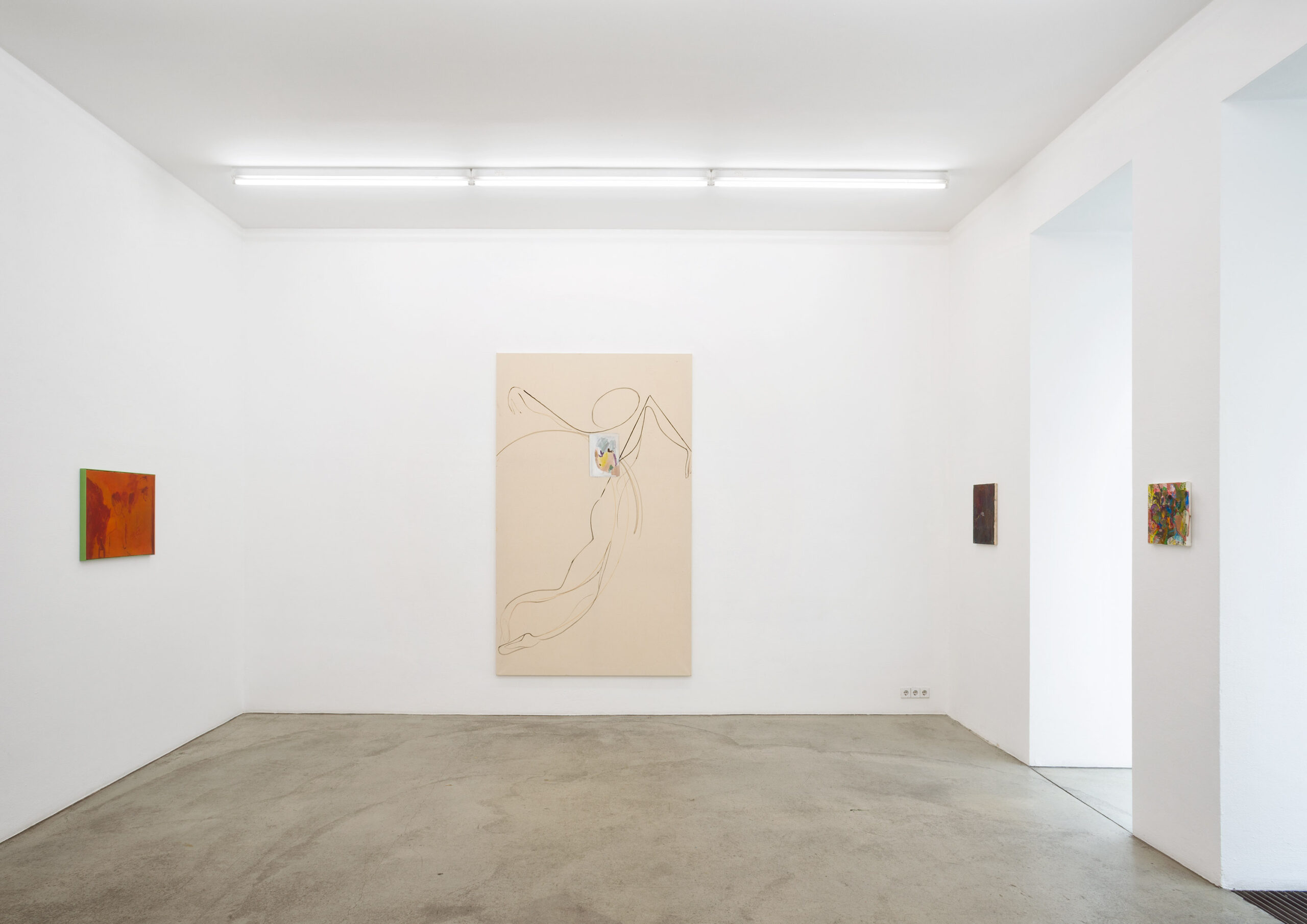 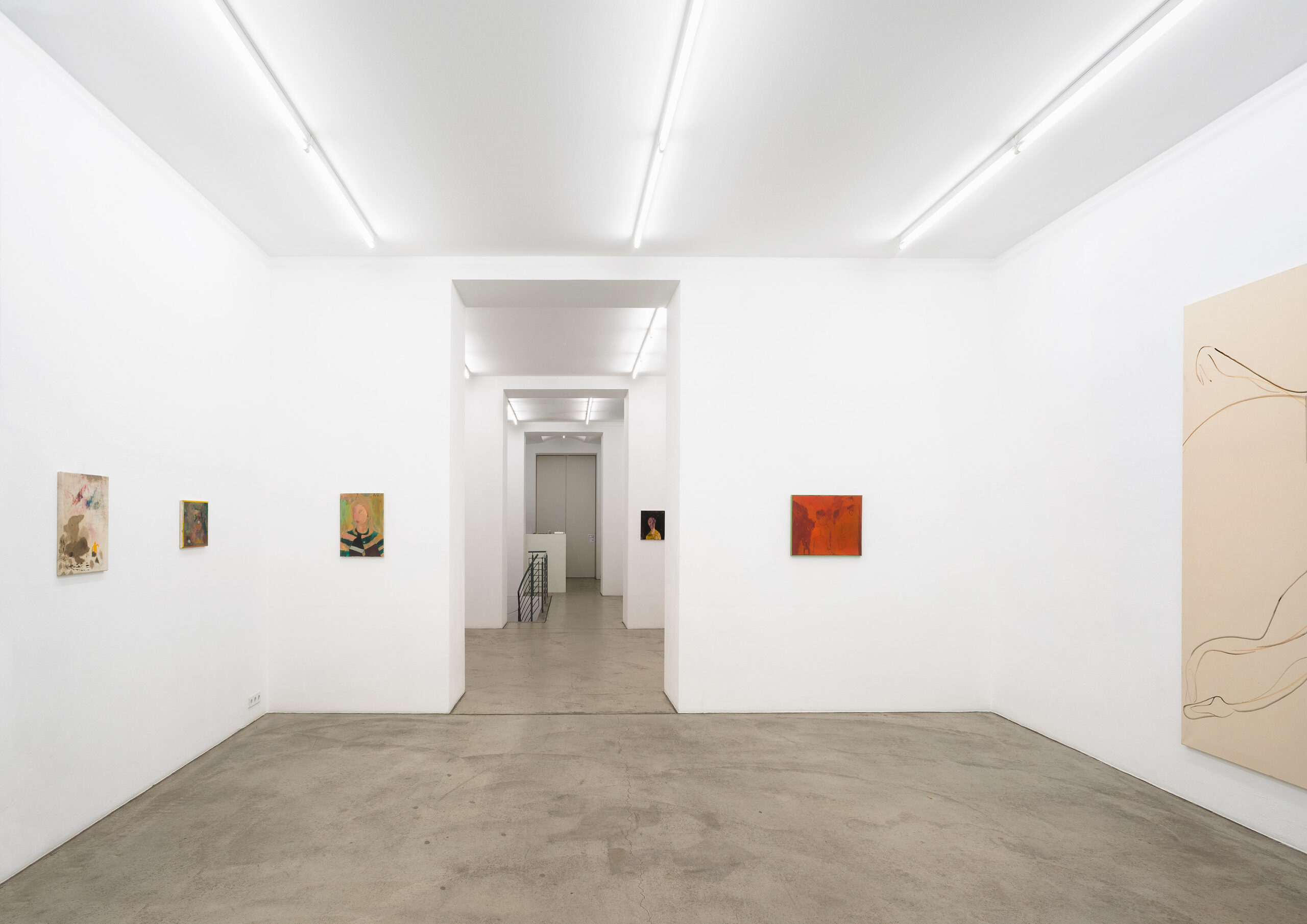 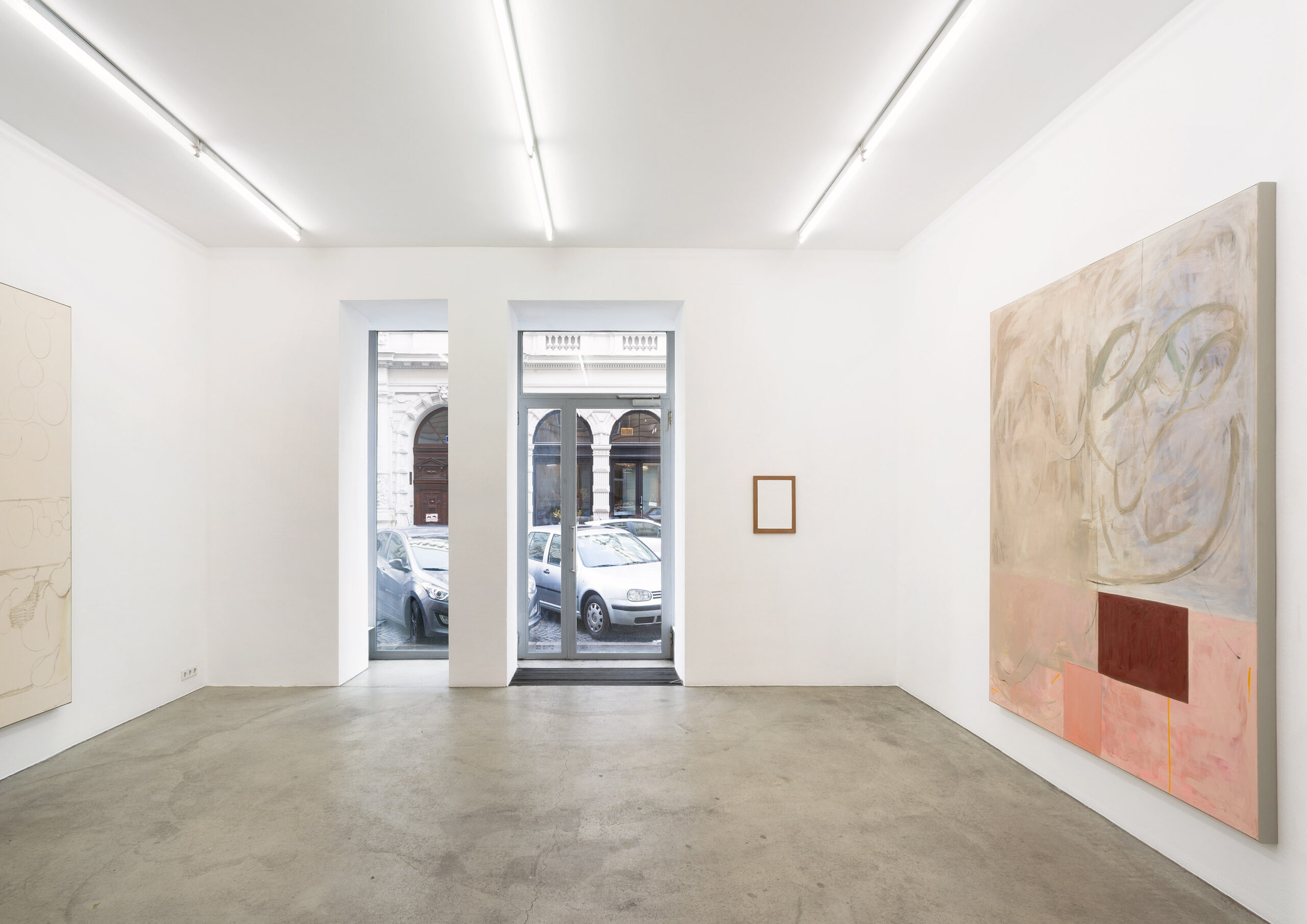