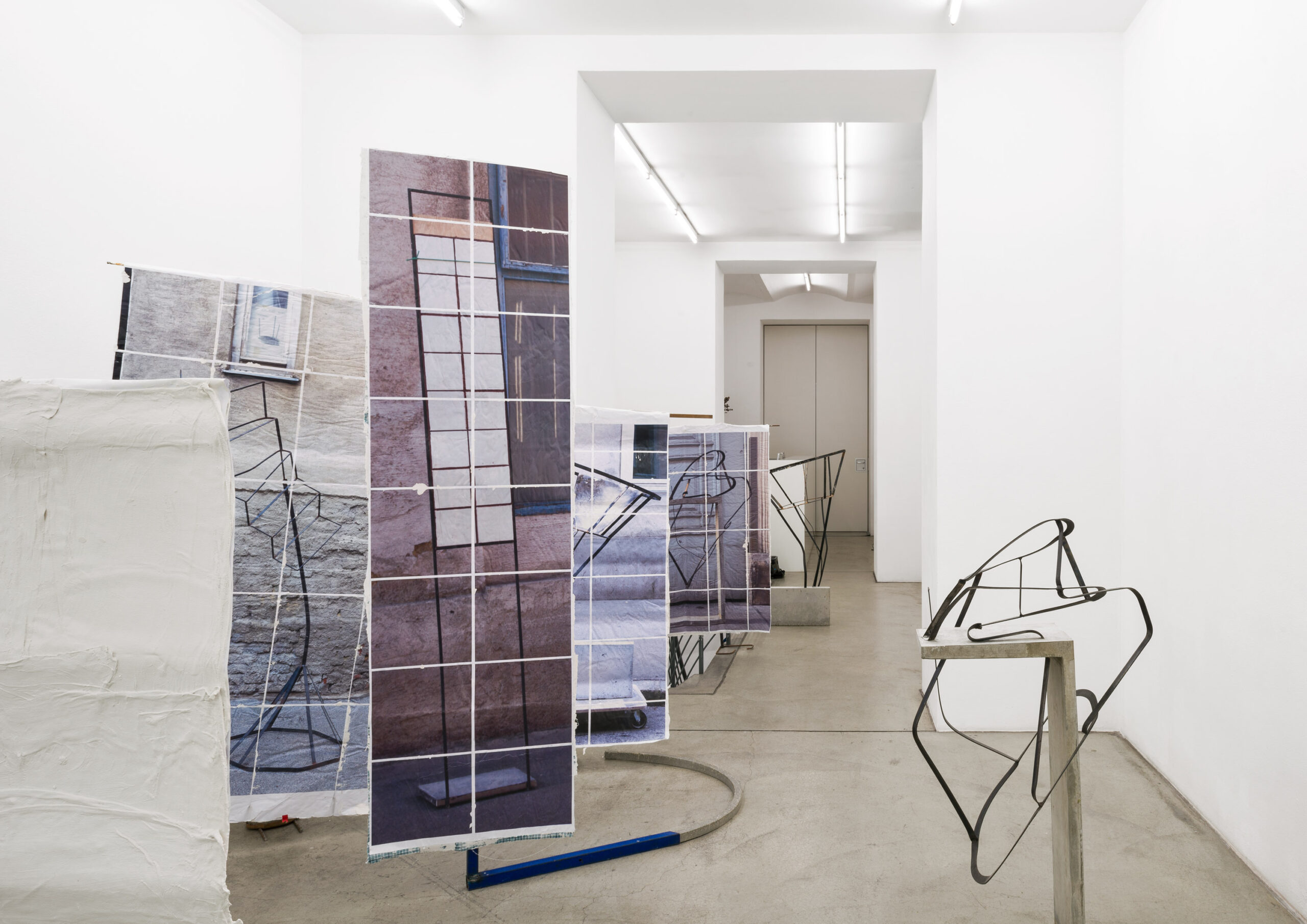 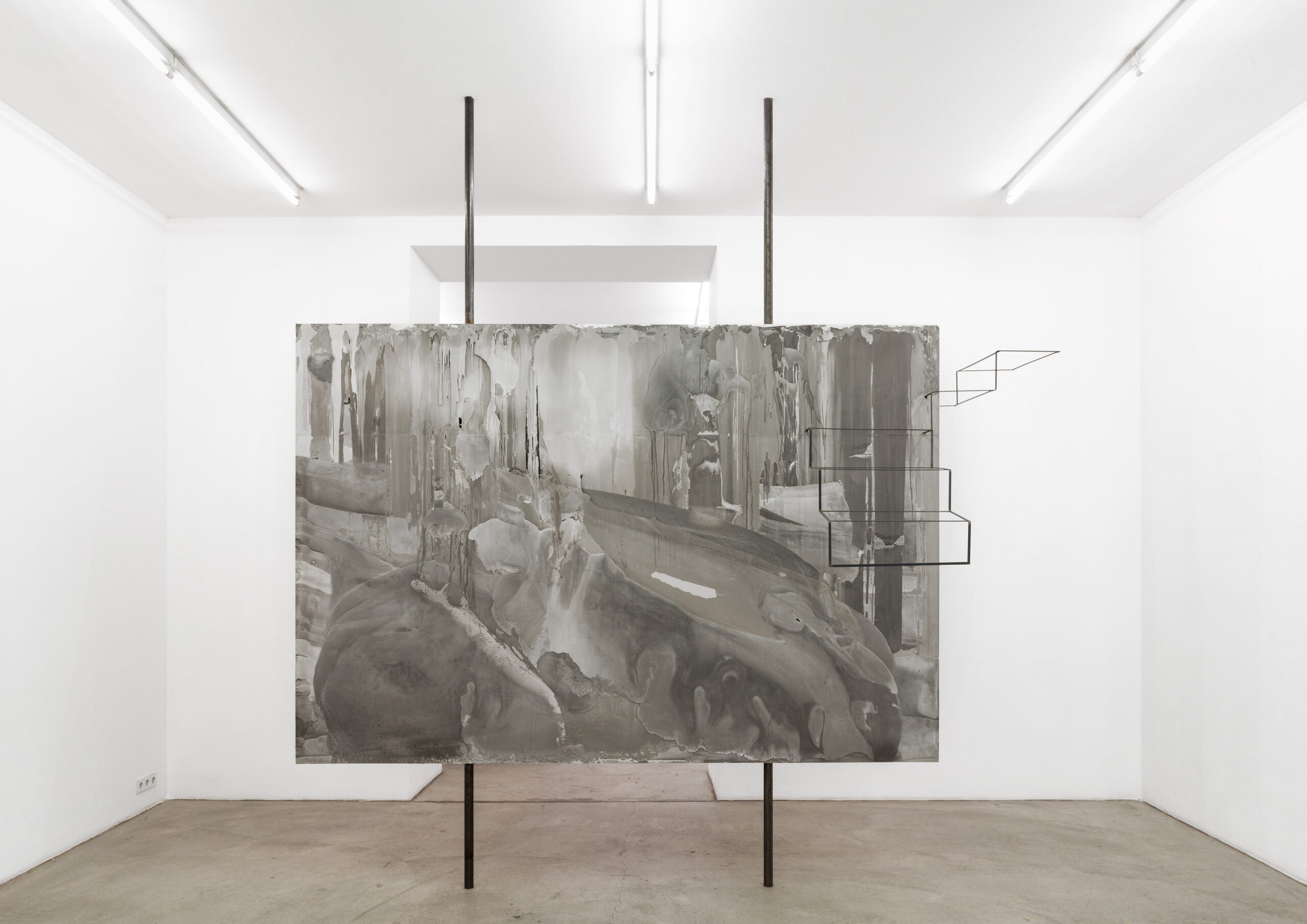 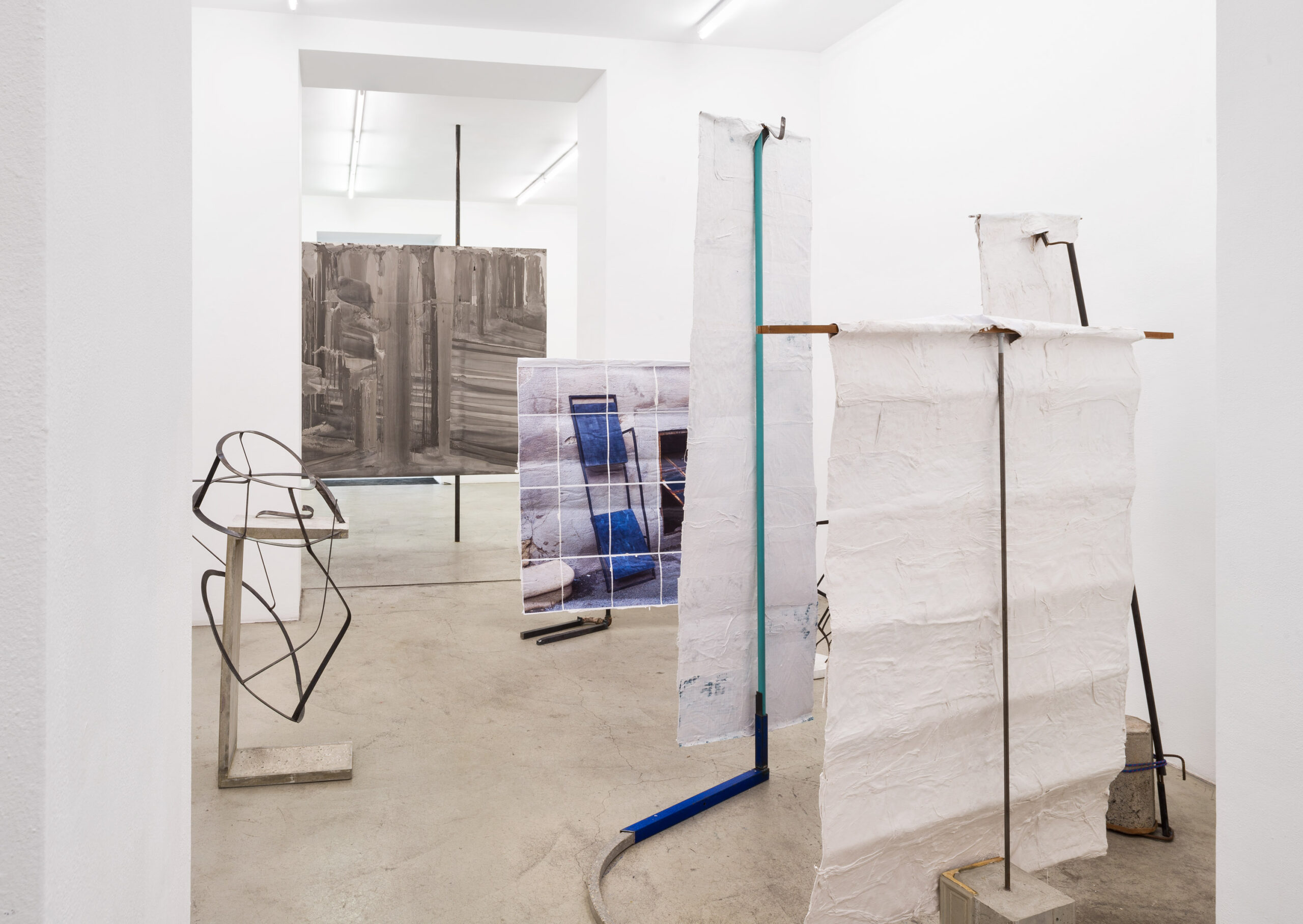 How does one write for an artist who’d much rather prefer the text to be non-descriptive and the audience to navigate solely via the displayed works and the ambiguous titles? Regulatory overkill and its undermining is an important constituent of Cäcilia Brown’s oeuvre, the need to give visitors space for their own conclusions is a natural consequence. The titles can be interpreted ad libitum, some, such as “Er zieht ein, sie zieht aus“ (he is moving in, I am moving out), may evoke associations based on personal experience but also allow for a socially reflexive analysis. Her astute avoidance of art historical references is striking, all despite her use of well-known materials and processes.

Surface design happens during production. In lieu of choosing varnish she burns a sculpture so that sections of it get soot-blackened.

Brown focuses on forces that contrast order, such as vehemence and turbulence. Creating her work requires the use of force as well as chance in order to exercise less control over the end result.

The burning of the sculpture on the grounds of unused, uncultivated land provoked an intervention by local security personnel. How much need for security in this day and age does this absurd, autotelic devotion to order suggest? Guidance and instructions render our communal life smoother. There are the ones we consciously fulfill, and then there are those embodied by public fixtures. Bollards, street signs, litterbins are components of her works; in our everyday life they subtly guide us, solely due to their position. At upheavals, it is those very fixtures that are the recipients of released frustration over emerging feelings of incertitude or anger about the regime turning against the citizen, for example in the case of licit eviction for the purpose of gentrification.

The monumental wall that is mounted on poles, presently shown at the Gallery, illustrates our mechanical willingness to obey, as we have to go around it – the only option would be to bang our head against it

Witless obedience is not an option for Cäcilia Brown, nor for her gallerists; Brown herself regularly pushes her limits while working; this means that gallerists as well need to bring up the same level of determination equivalent to Brown’s enthusiasm, questioning and combating anthropogenic rules. Additional permits need to be obtained, legal ambiguities regarding structural engineering and such must be resolved.

So in spite of her willingness to stretch the framework imposed by the art business, she is not entirely free to operate on her own grounds. She is indeed aware of her own first world problems that evolve during preparations for exhibitions, such as choosing which works should be displayed or reprocessing them in order to render them presentable.

And then, there emerges a parallel to the exhibition’s title: first world problems, respectively lamentation at a high, comfortable level; all this serves as a tool for the common citizen to distinguish himself from his peers, corresponding to his actual self-perception, and to transcend his class. Until this delusion is being taken away from him. Imposed rules are simulating to protect his interests, just as an illusory affiliation to the upper crust is being lent to him. The middle class features the vast bulk of buyers of luxury object rip-offs, produced at a lower price with a loss in quality. Cäcilia Brown offers “copies” as well, photographs of her works placed outside, providing elements from her sphere of interest or the environment mirroring the work itself in some way.

We like to think of art as a realm mostly free from conventions, and perhaps that is in fact the case to some extend. Cäcilia Brown rejects order, borders and comfort zone, no matter if brought on by herself or others and disregards it all for the sake of art.