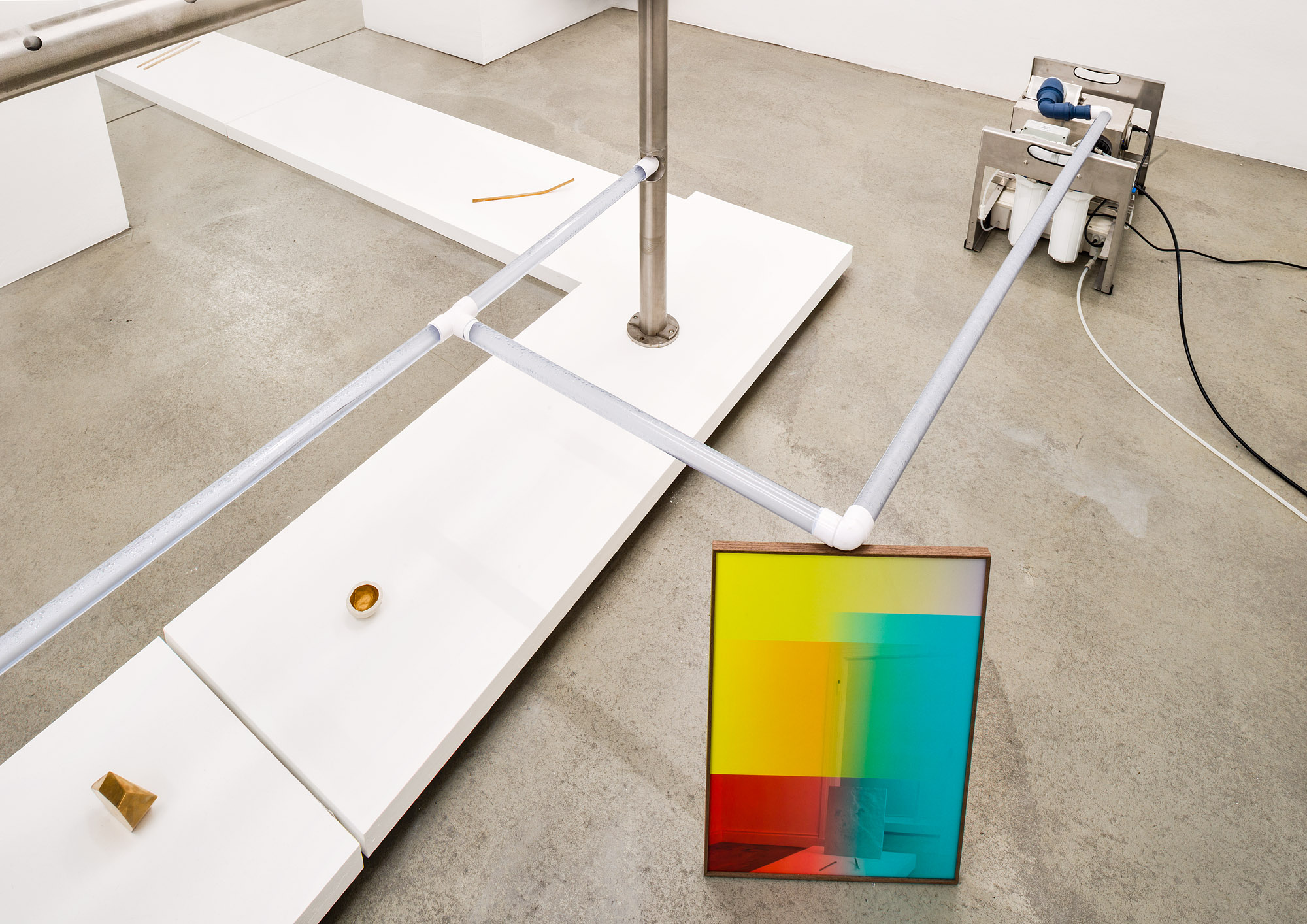 The bed is a counter-space for work. Inactive. We rest, and our bodies work without us. Warmth, digestion, relaxation. We dream. The subconscious works on us. We make love. Everything else happens of its own accord. We need the bed; it allows us to become inoperative. The bed demands no decision between active and passive, between yes and no; it does not compel us to make sense. It makes room for other states. We sleep, we die in bed. The bed is more than a counter-space. By bringing together work and inactivity, it suspends the daily conflict centered around meaning and the ceaseless quest for meaning—the bed is like The Neutral. It makes time stand still. A passionate place, a state of fervor, an intensity of exhaustion. With deep trust. In dreamless sleep. As a pair, or alone. Following sleep is an awakening. “I always sleep, I need time to wake up, to understand,” said André Gide on his deathbed. His awakening circumscribes an understanding delayed in time. Slow to understand. Wordless. Full of images. The show The small i could also be called The small n like The Neutral, or The small a like the object small a. The small i refers to the state of being inoperative, useless, inactive, and simultaneously receptive to other signals of communication. More like the static in the erratic yearning for a potentia passiva. A state of limbo, similar to art, in a delicacy of feeling that serves no end (Barthes).

The artworks collected here originate from two different generations of artists, and also from different periods. None of them treat the bed as a motif. Discernible in each work is this special state of being inoperative and open to the senses at the same time. Be it through absence, as in the case of this delicate vacuum caught in a state of dissolution in the work of Paul Etienne Lincoln (on view are drawings, documents, and excluded editions of the original work); through the presence of a constrictive reading experience in Lana Čmajčanin’s works; in the fascinating form-related material of collective temporal forms by James Cabot; or in the elegant, abeyant state of seeing and understanding in the installations of Saskia Noor van Imhoff. Embodied in each of these works is the impossible possibility of art. And that is what ultimately matters.

Paul Etienne Lincoln spent nine years working on a complicated apparatus which he dedicated to Madame de Pompadour (In Tribute to Madame de Pompadour and the Court of Louis XV, 1982–91). This operational construct symbolizes the absolutist royal court as subject to the king’s authority. At its center a vacuum is generated, vicariously representing Madame de Pompadour, the most famous of all mistresses. Two creatures reside inside: bees producing honey syrup and snails facilitating drainage into a complex calcium chamber where water is turned into gas in order to generate the vacuum effect. The entire Court was designed and built to slowly collapse. This performance was carried out twice: at the Royal College of Art in 1984 and in Cambridge at Coracle Press in 1985. On show in the present exhibition are drawings, documents, and excluded editions of the original work.

Lana Čmajčanin embroidered messages into a tablecloth with 166,987 pricks of the needle (166987 Pricks, 2013) using lustrous silver thread, with the messages being difficult to decipher. The English word “prick,” used here to denote stitching, is absolutely intended to evoke a vulgar double meaning. Čmajčanin’s text fosters a loop of seemingly uninhibited sexual encroachment and desire, thus arousing passion and rendering situations of public speech in such a way that shame causes a lump in one’s throat. Text, presentation, and materials ambiguously reflect the perennial sexual hierarchies, unreasonable demands, and role allocations to which women in the art world are subjected. Čmajčanin interprets the relationship between work, the (female) creator of art, and the beholder as a public exposition. With an approach that is imaginative and material in equal measure, her many pricks give rise to a counter-site within the art world and nonchalantly illuminate its intrinsic rules.

James Cabot crafted five quiescent objects from moist clay with the aid of stencils (Clay Pots, 1990). The objects’ profiles reflect demographic statistics from Germany between 1910 and 2033, differentiating between male and female population segments. The Latin word statisticum means “pertaining to the state,” so the curves of the clay sculptures reflect the collective statistical body of sexual reproduction. By sequencing them in intervals of about one generation (1910 – 1939 – 1959 – 1986 – and then the prognosis for 2033 in longer intervals), a shape of time may be experienced by the senses. The forms encounter gently flowing transitions in the object and bizarrely grow into a gnarled and pending future from a nearly uniform pyramid in the early twentieth century, here assigned the form of a three-dimensional cone, by way of historical catastrophes, constrictions, and deformations.

The installations by Saskia Noor van Imhoff are made up of cross-references, traces of materials, colors, and images of choice elegance that accommodate personal items but also objects from archives containing her own artwork and that of others. The works are titled with consecutive numbers. Questions regarding the reality of the items and their content are translated into artistic form and classification, thus being liberated from simple referentiality. It is as it is. Over time, a delicately spun web slowly expands and yet returns to itself. In creating her presentations, Imhoff also works with space that she may activate or immobilize to the point of inaccessibility. Its open referential structure within the artwork is more interested in pursuing questions than answers. If all goes well, there is a machine situated in the cellar producing cooling fog from time to time.

The artworks collected here originate from two different generations of artists, and also from different periods. None of them treat the bed as a motif. Discernible in each work is this special state of being inoperative and open to the senses at the same time. Be it through absence, as in the case of this delicate vacuum caught in a state of dissolution in the work of Paul Etienne Lincoln, symbolizing Madame de Pompadour, the most prestigious of all mistresses. She was a very ambitious woman of the 18th century, who influenced the strategy of warfare and gave prominent cultural support with her power at the court of Ludwig XV. (On view are drawings, documents, and excluded editions of Lincolns original work). Lana Čmajčanin shifts the perspective of power relations from an imperial mistress to the function of the femal artist as a public woman and a sexualized object. Her stage is the working system of the art wolrd more than the bed. The fascinating form-related material of collective temporal forms by James Cabot shows, roughly spoken in this context, the results of working in bed by a whole population, separating between female (left side of the clay pot) and male (right side of the clay pot). The elegant, abeyant state of seeing and understanding in the installations of Saskia Noor van Imhoff refers to the bed as a mere allusion. Her machine works steadily in the basement like a body or the unconscious influencing the perception of the space as a complex installation, alluding the archive, memory and art as exibition. The space of the whole gallery has changed into a bed-like condition of inactivity, interrupted by temporary actions. Embodied in each of these works is the impossible possibility of art. And that is what ultimately matters.

Dirck Möllmann (*1963) is curator at the Institute of Art in Public Space Styria, Universalmuseum Joanneum, Graz. 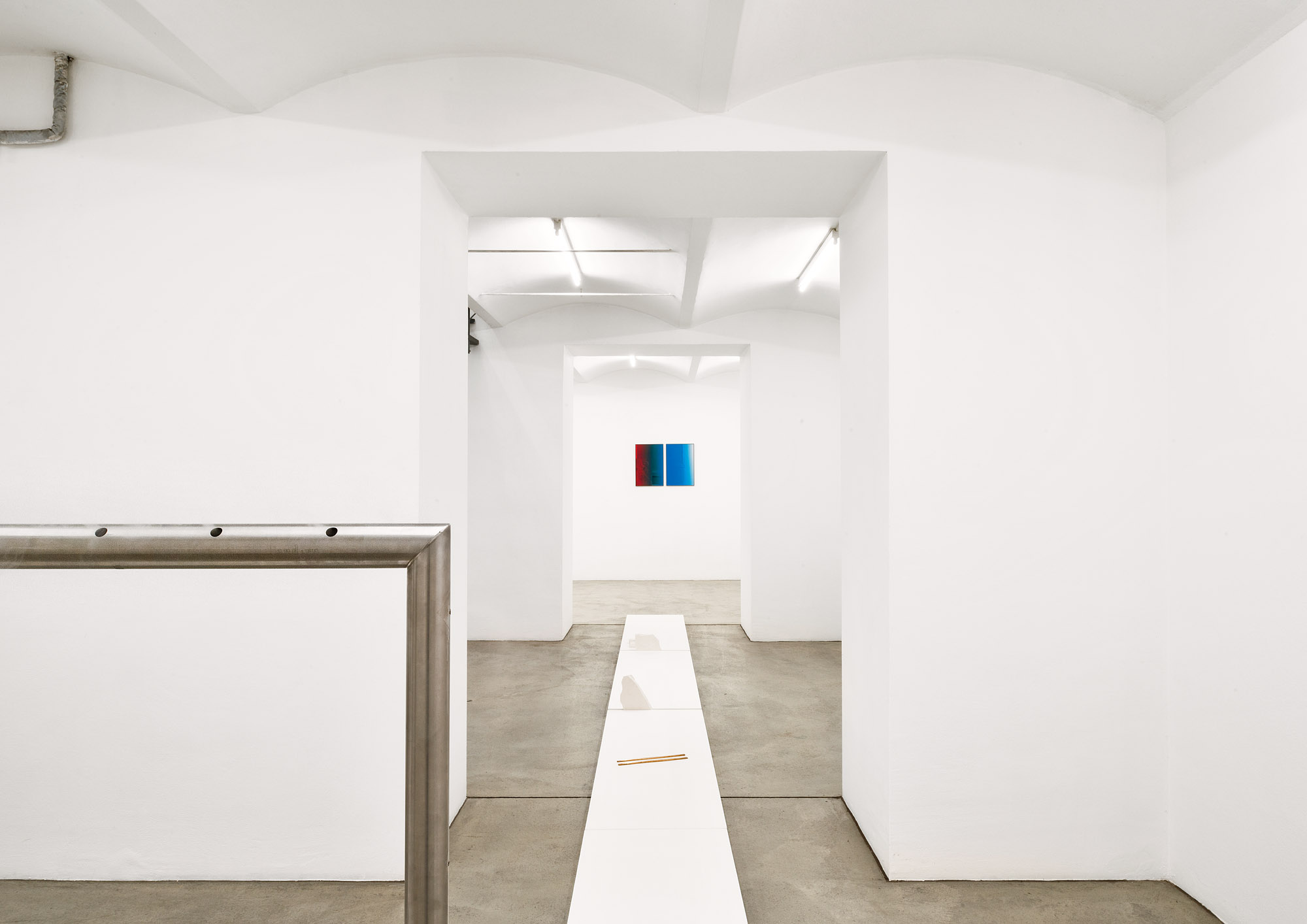 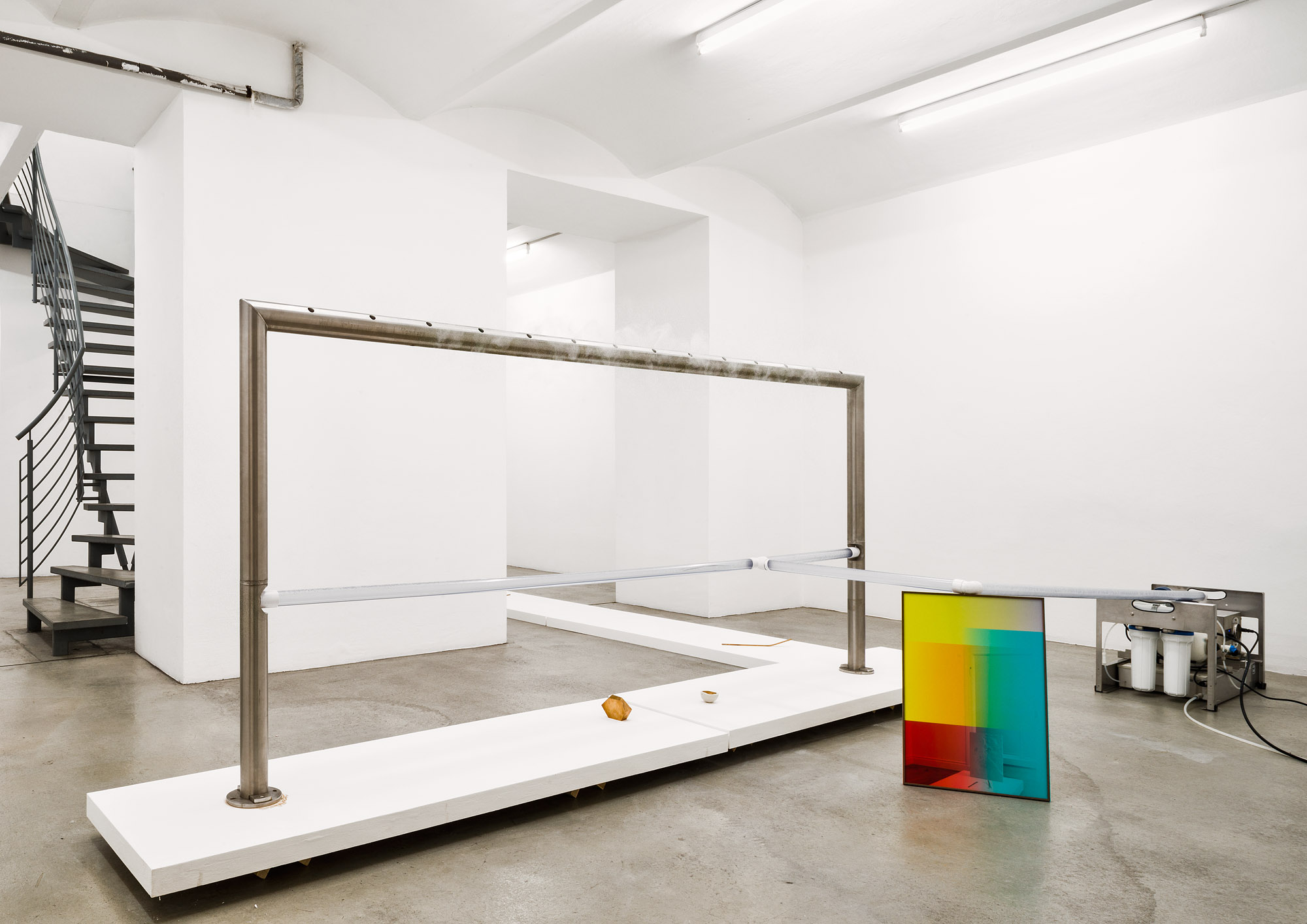 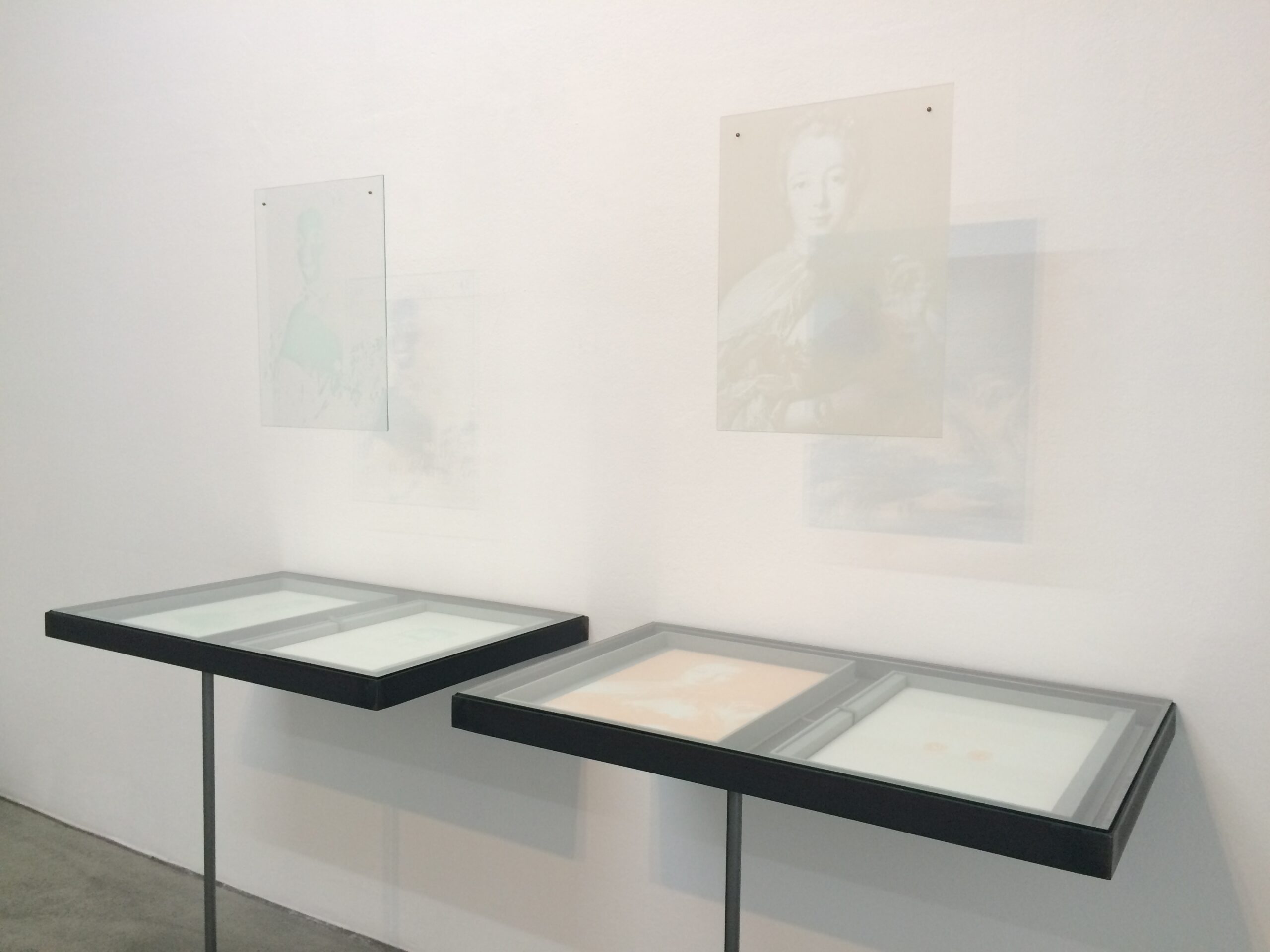