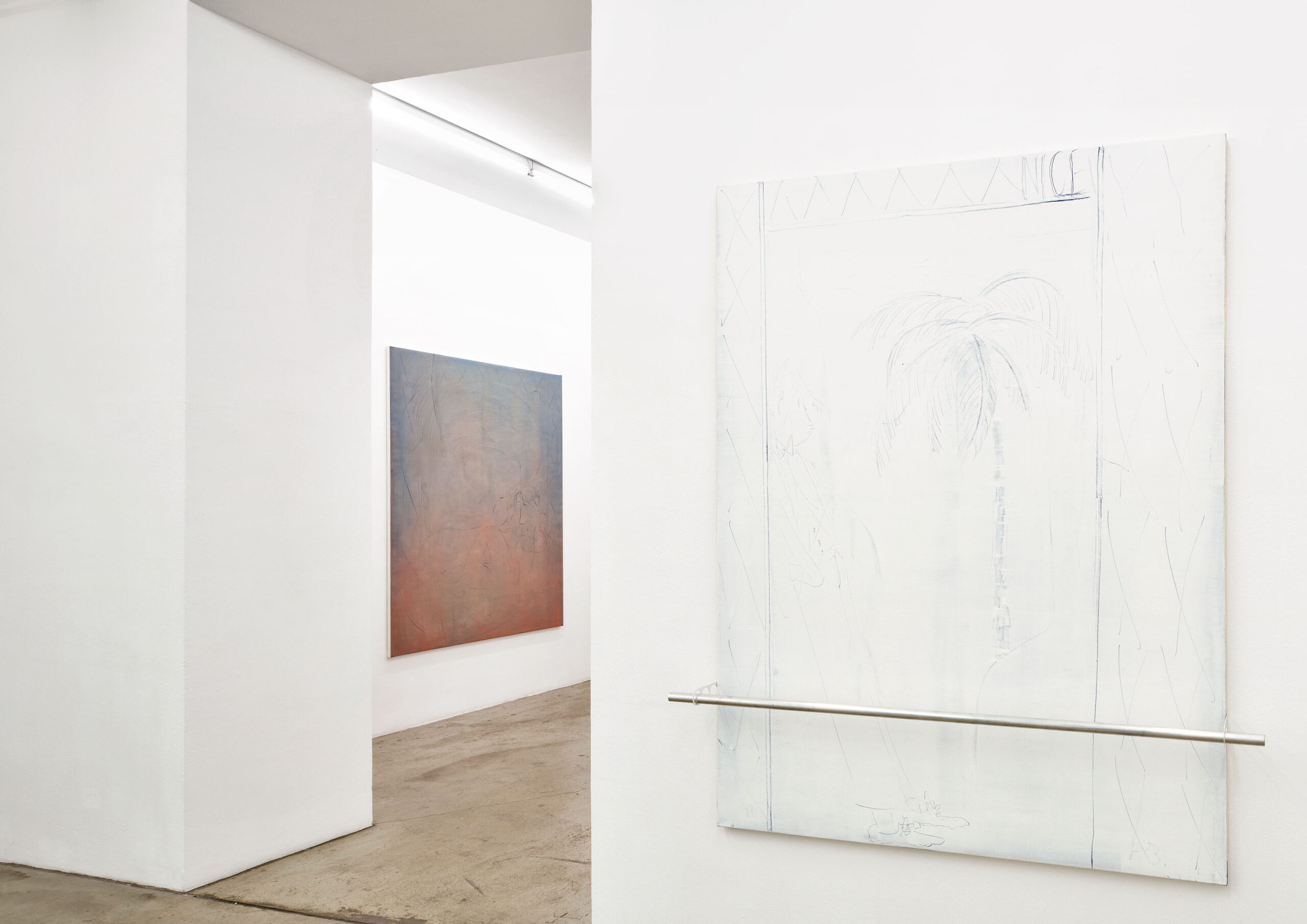 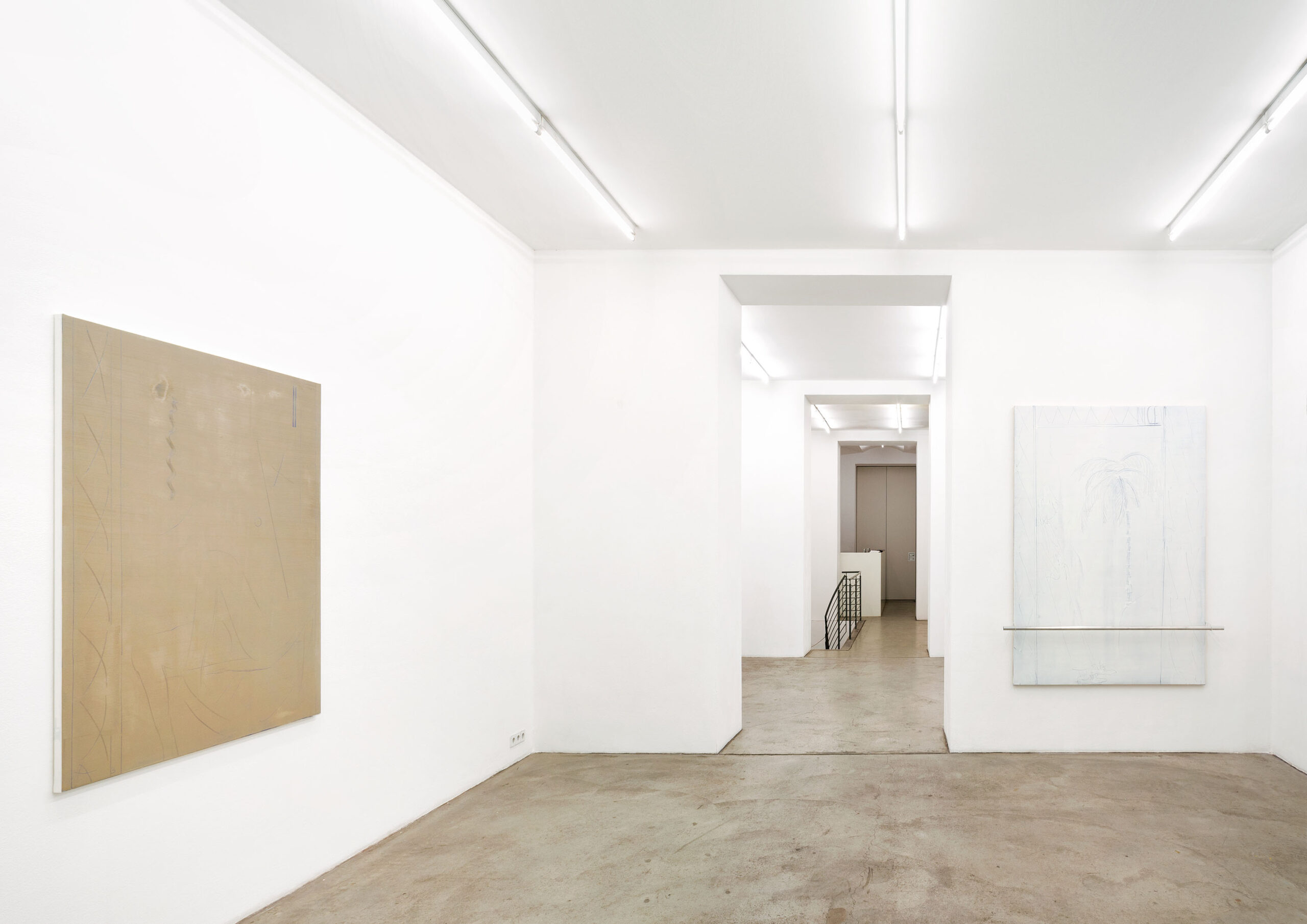 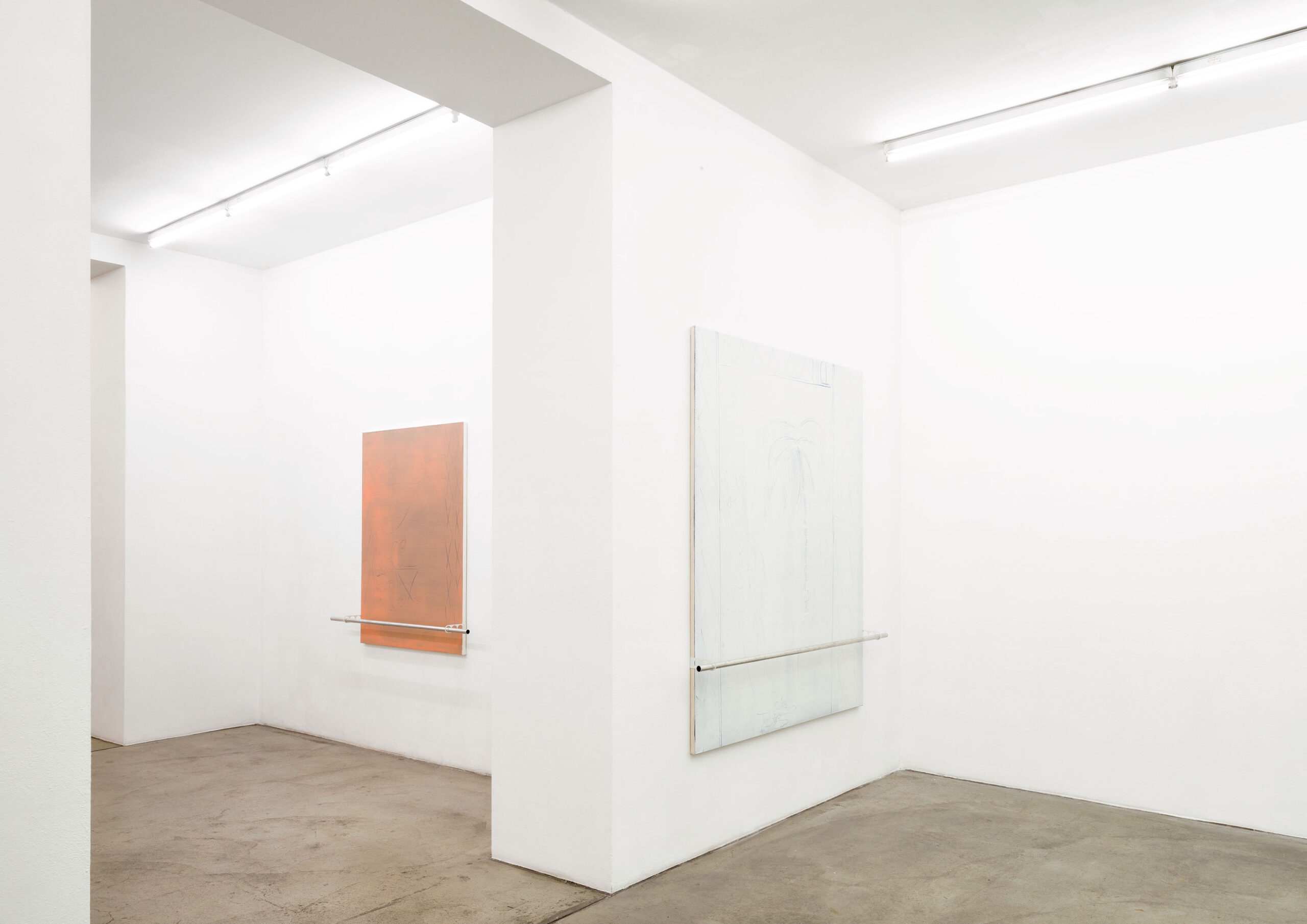 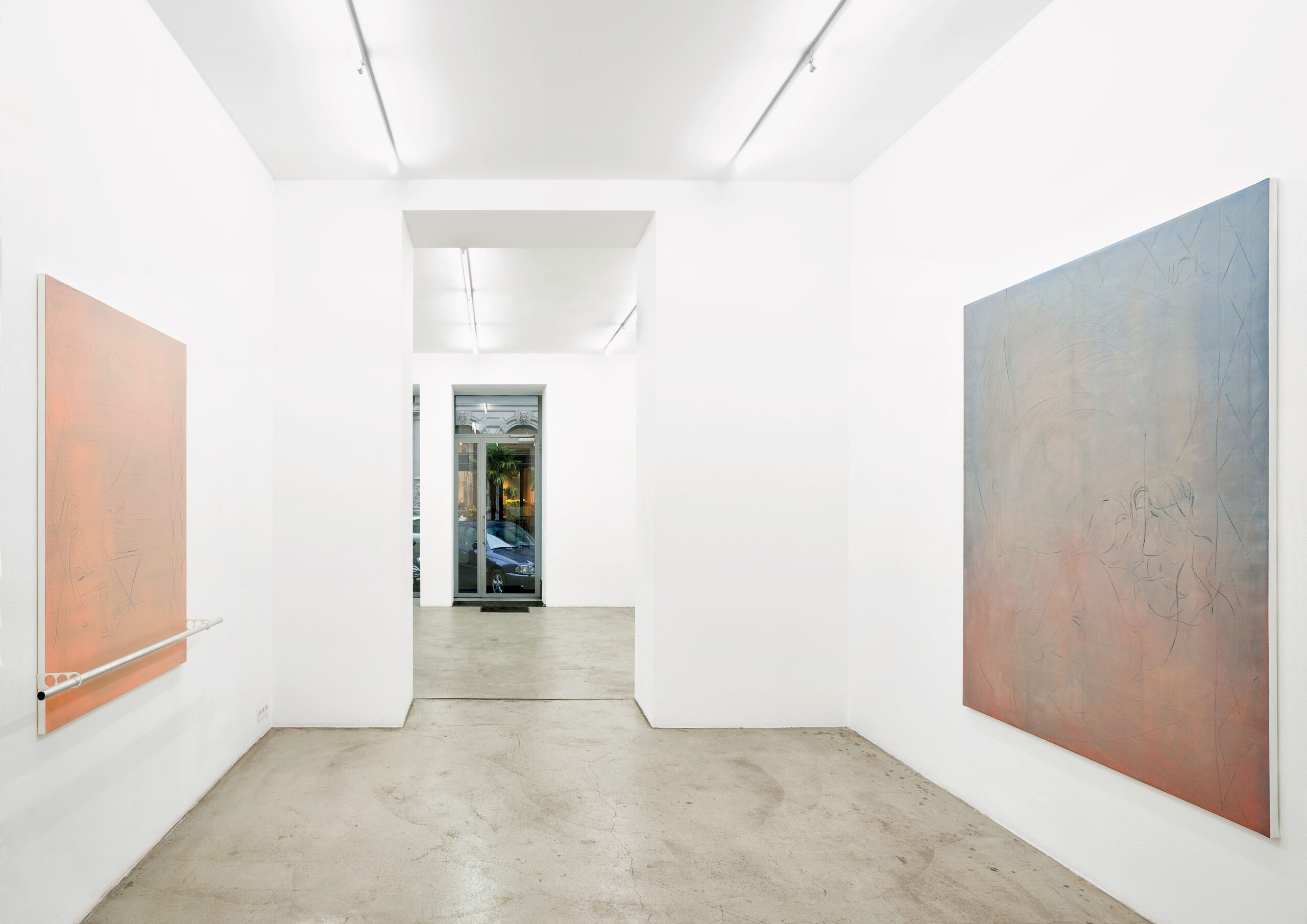 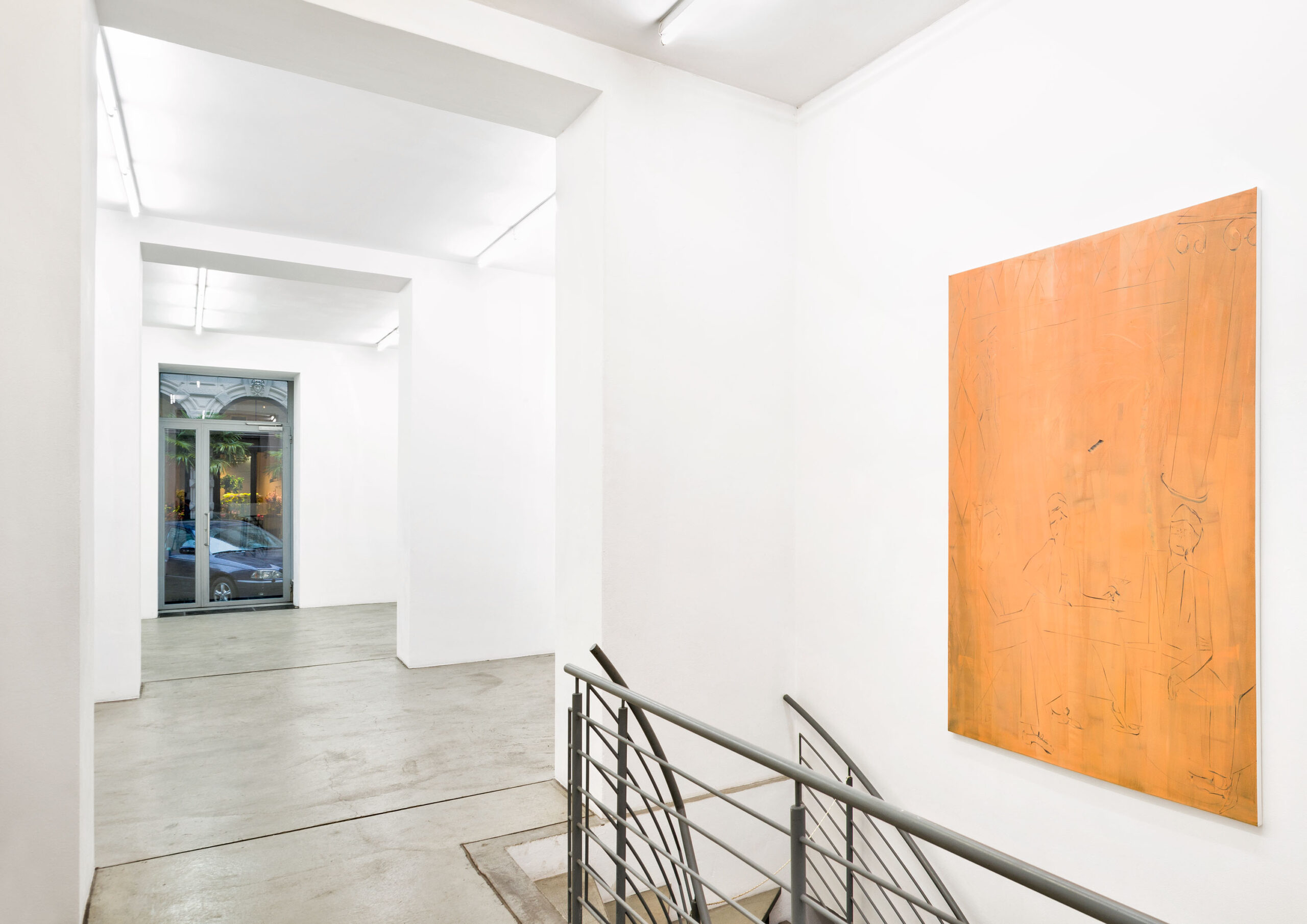 Since September 2014, Adrian Buschmann has been living and working on the Italian Riviera. A reminiscence of Claude Monet, Henri Matisse and Francis Picabia, who also resided nearby. On the search for inspiration regarding new works, Adrian Buschmann had the desire to follow in the footsteps of his role models. With the view on the sloping mountain ranges of the Ligurian Alps leading to the sea resort of Bordighera, the area of Riviera di Polente promises fantastic sunsets. It is this scenery that marks the beginning of another phase of Buschmann’s artistic oeuvre.

Adrian Buschmann’s new paintings show beach scenes: sketchy portraits of situations at the coast or cafés are scratched into the color layers on the canvas. The letters NICE and X encompass the pictures, thereby opening the gate to the motif: bathers in the sand, lovers and people who are talking convey the image of a well-to-do boredom. Sometimes, a handrail separates the scenery from the observer, unfolding from the motif a border between beach and promenade, work of art and observer.

Making reference to Leon Chwistek, Adrian Buschmann has painted this image of a careless society, drinking, dancing, and consuming before. In his current works, the artist relocates this scenery to a beach, but refrains from evolving the theme any further. Patterns that are independent of the current zeitgeist and world affairs are the central theme of the series. The almost empty and faded pictures evoke a sense of disenchantment – as if the artist had failed in his ambition and if his works had been blinded by the sun.